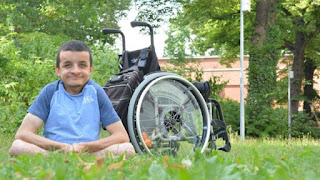 Many Syrian refugees can say their move to Germany was life-changing, but for wheelchair-user Anas al-Hakim it has meant freedom and a new role in community service.
The 25-year-old moved from Damascus to Berlin in 2013 and founded a non-governmental organisation (NGO) called Make it German.
It provides free advice to fellow Syrians and other Arabic-speakers new to Germany on all aspects of life, including study opportunities and finding a job.
Anas was born with craniofacial fibrous dysplasia, a genetic disease that affects the shape of bones and their development.
He was able to walk when he was a child, but as he grew older, his condition became worse.
In 2003, he travelled to Germany for the first time for medical treatment. But spinal surgery left him permanently paralysed and wheelchair-bound.