January 19, 2017
Manchester United have returned to the top of the Deloitte Football Money League for the first time in 11 years after recording the highest annual revenue for a football club in history.
United's record revenue for the 2015/16 season of £515.3m sees them leapfrog Spanish giants Barcelona (£463.8m) and Real Madrid (£463.8m), who sit second and third respectively.
Champions League holders Real slip to third after 11 years at the top, despite breaking the €600m revenue barrier for the first time.
The Deloitte Football Money League measures a club's earnings from matchday revenue, broadcast rights and commercial sources, and ranks them on that basis. The study does not include player transfer fees.' 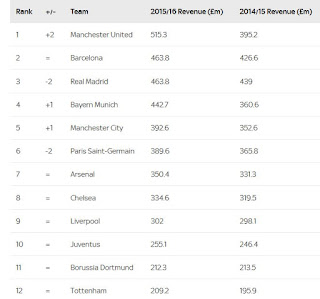