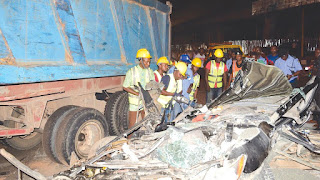 An American returnee, billed to have travelled back yesterday, died in a fatal head-on collision with a trailer fully loaded with granite, while her driver sustained grievous injuries. The incident, which occurred around 2:03a.m., happened at Stadium Bus Stop, inward Alaka, Surulere, Lagos State.
According to an eyewitness, the car carrying the American returnee, a black Camry Saloon car with registration number KUJ 412 AA (FCT), had rammed into the trailer with registration number EKY 668 XL.
Responding to the distress call, the Lagos State Emergency Management Agency (LASEMA) said its operatives immediately activated the agency’s Emergency Response Team (ERT) to the scene of the incident.
Preliminary investigation conducted by the ERT at the scene of the incident revealed the immediate cause of the incident as reckless driving. According to the agency, the driver of the saloon car was driving recklessly, as well as over-speeding when he rammed into the trailer.
He was said not to have noticed the moving trailer driving inward Stadium Bus Stop and thus, lost control and crashed into the truck, upon sighting it quite late.
Confirming the incident, the General Manager of LASEMA, Mr. Adesina Tiamiyu, said they responded immediately they got the distress call. He said: “An adult female, who was billed to travel to the United States lost her life while the driver of the Camry car sustained some injuries.
“He was taken to the trauma centre by the LASAMBUS officials, while the agency’s ERT extricated the trapped victim from the mangled car and was handed over to the police from Surulere Division.”
He, however, expressed dismay at the attack on the agency’s officials by irate youths at the scene of the incident during their recovery operation.
He said the state government would no longer condone unnecessary attacks on its officials while performing their assigned duties.
While advising motorists to drive within the approved speed limit and also observe road traffic signs, he said the police would carry out further investigation into the incident.