DETAILS OF HOW CHELSEA WIN SUPER CUP WITH PICTURES 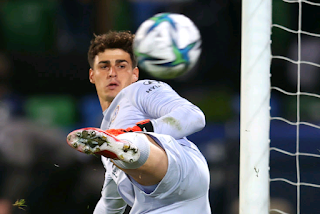 Substitute Kepa Arrizabalaga made two saves in a penalty shootout as Chelsea beat Villarreal to win the UEFA Super Cup on Wednesday night at Windsor Park after the game finished 1-1 after regular and extra time.

The annual match between the winners of the Champions League and Europa League was played in Belfast, Ireland, as the resumption of club play across Europe's top leagues looms this weekend. 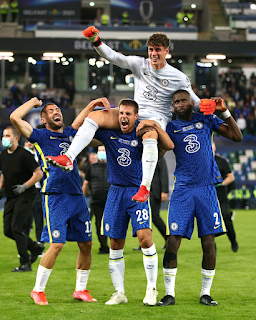 Hakim Ziyech scored the opener for Chelsea in the 26th minute, redirecting a Kai Havertz cross past Villarreal's Sergio Asenjo to stake Thomas Tuchel's side to a 1-0 lead.

"It was certainly not spontaneous," Tuchel said of the goalkeeper switch. "We had some statistics, we were well prepared. Kepa is the best percentage in saving penalties. The analysing guys, the goalkeeper coaches showed me the data and then we spoke with the players that this can happen. 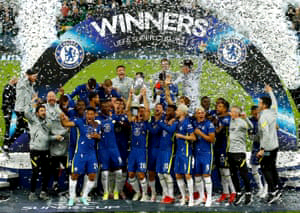 "And since then they know and it's fantastic how Edu accepts it. Kepa is better in this discipline and these guys are true team players."

Christian Pulisic came on for Ziyech, who appeared to pick up an injury, shortly before half-time, while both Tuchel and Antonio Rudiger were shown yellow cards following the Germany international's seemingly innocent tackle on Yeremi Pino.

Villarreal forced the issue in the second half and netted a deserved equaliser in the 75th minute when Gerard Moreno blasted past Chelsea keeper Edouard Mendy after a clever back-heel assist from Boulaye Dia.

Both teams pushed for a winner, but none came and the Super Cup went to extra time for the fourth consecutive year.

Asenjo turned away a Mason Mount effort in extra time, the best chance of the added period, and Tuchel brought on Kepa for Mendy with the game headed to spot kicks to determine the winner.

Kepa saved once from Aïssa Mandi and then kept out Raúl Albiol's spot kick after Rudiger had converted just before to hand Chelsea the win in a dramatic 6-5 shootout win.

"It was tough, 120 minutes," said Tuchel. "We were very strong in the first 30-35 minutes and then we lost a bit easy balls after our goal... the equaliser was well-deserved.

"Right after we conceded the goal we were very strong again, right until the end."