Bruno Fernandes and Paul Pogba were the star acts of what was a scintillating team display as Manchester United turned on the style in their rout of Leeds who ended shell-shocked and desperate for the referee, Paul Tierney, to blow the whistle.. 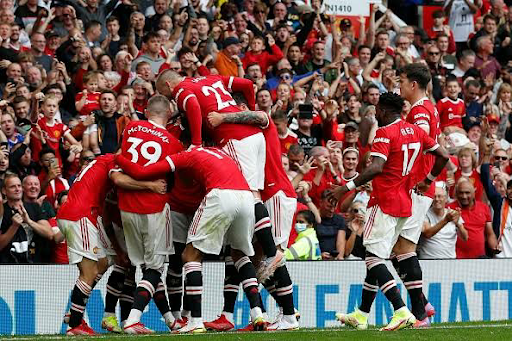 Last season’s corresponding fixture had Leeds trounced 6-2 but this was a far finer display from United who were a study of effervescent and powerhouse football. Fernandes ended with a hat-trick and Pogba as the chief conductor, his clutch of assists illustrating precisely why Ole Gunnar Solskjær values him so preciously.

For the neutral, too, this was a rousing return to a sold-out Old Trafford that featured United and Leeds going at each other like cruiserweights before a crowd whose volume level pushed the needle into the red throughout.

Fernandes’s slickly taken first-half strike came via the kind of rapid-tempo that will delight Solskjær. From near halfway Scott McTominay pinged the ball to Pogba whose instant relaying of it had Fernandes pulling the pass down with a feathered touch, then beating Illan Meslier, the Leeds goalkeeper, from a finish that pin-balled home off the latter’s right leg.. 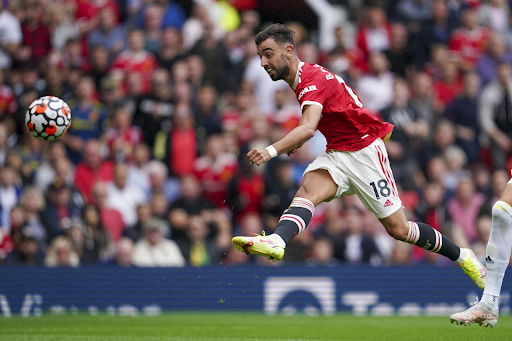 For this first of the 38-game campaign United were configured in Solskjær’s usual 4-2-3-1, 17 months after the last full house in the stadium. Then, 73,288 saw Manchester City handed a 2-0 derby defeat that ended in raptures as McTominay struck the 40-yard second into an empty goal.

Today the midfielder had Fred alongside him to form a partnership that can lack flair and which was fielded due to a reshuffle in attack that featured Pogba pushed up, as Anthony Martial’s condition was enough only for a substitute role, where he was joined by Jadon Sancho, the £73m summer signing.

An ever-present roar began with the pre-kick-off parading of Raphaël Varane as his protracted transfer was finally sealed (subject to international clearance) while Sancho would enter for his debut, alongside Martial, on 74 minutes.

United’s ascendancy had lacked the killer touch of further finishes when the interval arrived and so it was that the second half began with all results still possible. For this, Marcelo Bielsa introduced the new signing, Junior Firpo, Rodrigo making way, and soon his team were level. This was a finish to remember, as Luke Ayling, the right-back, collected from Stuart Dallas, who strode forward and let fly a peach that was always curling away from David de Gea.

Cue a raucous travelling support pogoing and chanting, “Let’s go fucking mental”. The opposing fans and the contest soon did the same, as United embarked on a goal-rush. Their second strike was even finer than the game’s previous two, in what was a scintillating back-to-front sequence that had Luke Shaw finding Pogba in traffic near the United area. What came next was a sublime 40-yard ball from the No 6 that skimmed beyond Pascal Struijk into the path of the galloping Mason Greenwood along the left. The forward skated in on an angle, then beat Meslier with a finish that hit the far post.

Seconds later there was more. In this mood Pogba is the world beater he can be billed as, able to dictate when the goal is breached. So it was that his next contribution was a disguised ball that hit Fernandes. The No 10 performed a shoe-shuffle that left defenders flailing and him able to register with his left, goal-line technology confirming United’s third.

If this was supremely enjoyable for the United congregation, they next entered dreamland courtesy, in part, from the unlikely figure of Vi
On what was an opening day to remember the goals just kept coming. The latest United slick move featured Greenwood’s around-the-corner pass into Pogba and he – yet again – was provider, rolling the ball to Fred, who can be maligned and whose finish made it 5-1 and equalled his total of last term.

By the close this was the perfect start for United, a total nightmare for Leeds.