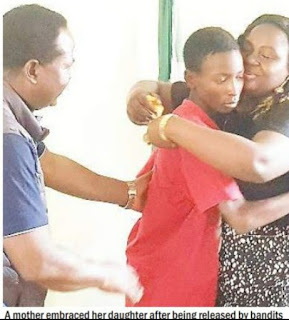 ONE of the freed Bethel Baptist School students, Favour Silas, has said she would miss the National Examination Council (NECO) Examination and the West African Examination Council (WAEC) saying, “I am not sure whether I will have the mental strength to write the exam as a result of what I passed through,” she said.

She also said that one of the traumatic experiences she and the other students faced was not being served food regularly in the bandits’ camp.

“Sometimes, they left us without food for four days; we survived by wandering the bush looking for anything eatable.”

Silas also disclosed that another bitter experience was “the bandits asking us to sleep on cow faeces.”

Speaking in an interview to Nigerian Tribune in Kaduna after she regained freedom, the Senior Secondary School (SSS3) student narrated also how the bandits beat them whenever they violated any rule assigned to them.

I never thought I would come out of that jungle alive; I thought we were going to perish,” she said.

Earlier, the president of the Baptist Church, Reverend Israel Akanji, while handing over the 15 freed students to their parents, thanked them for their patience and understanding during the trial.

He said though they were expecting to see all the remaining students freed, the 15 released was still a welcome development.

Reverend Akanji said: “We are optimistic that in the coming days, the rest of the remaining 63 students under the care of the bandits will equally be freed.”

Fifteen more abducted students of the school regained freedom after 48 days in captivity.

The state chairman of the Christian Association of Nigeria (CAN), Reverend John Hayab, disclosed this when he spoke with newsmen in Kaduna on Sunday. Reverend Hayab said: “Fifteen more students were released on Saturday night and 65 students are still with the bandits.”