CONGRATULATORY MESSAGE TO A VIRTUOUS WOMAN WITH GUIDED STEPS TO STARDOM

On 20th July, 1953, a rising star simply christened  'BETTY' was born to the humble family of Chief and Mrs. B. Anyanwu at Emeambiam, Owerri-West LGA of Imo state.

Ma, with your guided steps, you broke the cultural and tribal barriers to marry a young, tall, hairy, fearless, handsome and intelligent law graduate from Ondo state, across the Niger. 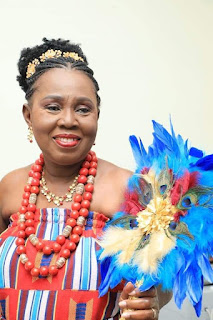 Just as a solid rock cannot be shaken by the storm, you took another guided decision to stand by your husband especially throughout the turbulent political upheavals and weathered the storm with him in which most of the noble women would have been crumbled.

As a philanthropist extraordinare, feminist, and gender activist, you founded Breast Cancer Association of Nigeria, (BRECAN) to save innocent and indigent cancer patients dying yearly as a result of lack of information and education. 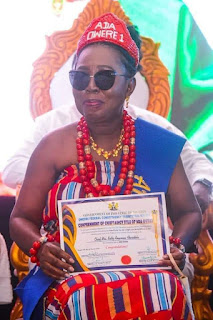 As resplendent and first lady of reference, you equally established BEMORE that has engaged over 1,500 young girls in digital training with a view  to changing their narratives from that of abuse to socioeconomic and self actualization.

No wonder the glitz, rich culture and tradition of Imo people were on display at Graceland Event Centre at Irete off Owerri/Onitsha road, Owerri to crown you as the ADA OWERRI 1 on Saturday 14th of August, 2020.

This prestigious chieftaincy title was not only in recognition of your stories of survival, resilience, and early life gril but your undying spirit and unquenchable penchant to save more lives and stop all forms of abuses, discrimination and inequality against women and the girl child.