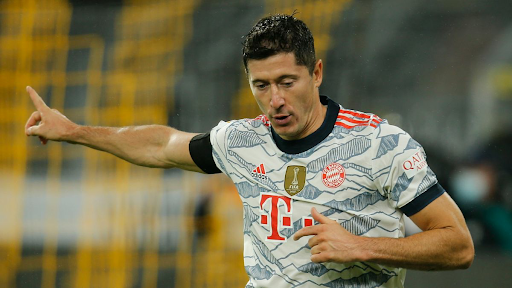 Erling Haaland’s hopes of beginning his final season at Borussia Dortmund with silverware were ruthlessly wrecked by Bayern Munich’s Robert Lewandowski in the DFL Super Cup.

New Bayern boss Julian Nagelsmann celebrated his first trophy as a manager as Die Roten claimed a 3-1 win at the Westfalenstadion - a record-breaking fifth straight win over BVB.

Typically it was Lewandowski who did the damage, scoring the opening and final goals of a breathless game.

And if Bayern are indeed interested in poaching Haaland next summer - when his £64million release clause kicks in - making him Lewandowski's long-term replacement, then don't expect the 32-year-old to go quietly.

While Haaland looks set to be European football's next great No.9, the continent's current standout centre-forward has no intention of handing over his crown any time soon.

Lewandowski, Reus’ great pal, made no such mistake when presented his first opportunity of the game in the 41st minute, timing his run between defenders expertly before meeting Serge Gnabry’s cross and planting a fine header past Gregor Kobel.

Four minutes into the second half, the German champions doubled their advantage, a slick move down the left sending Alphonso Davies free and his low cross eventually found Thomas Muller, who couldn’t miss and duly tapped into the net from three yards.

Haaland, typically, had the ball in the net shortly after, only for it to be ruled out for a marginal offside, as BVB came on strong in front of a vociferous home crowd.

Reus duly reduced the arrears on 64 minutes with a superb first-time 20-yard strike that found the top corner, after being teed up by Jude Bellingham, who produced a fine all-action display.

But as Dortmund pushed for an equaliser they duly handed the game to Bayern 11 minutes before full time, when Manuel Akanji’s error allowed Lewandowski to pick his spot and beat Kobel.

But as Dortmund pushed for an equaliser they duly handed the game to Bayern 11 minutes before full time, when Manuel Akanji’s error allowed Lewandowski to pick his spot and beat Kobel.

Feeling Haaland, outstanding in recent matches, cut a largely frustrated figure here and, unlike in the German Cup Final in May, couldn’t get the better of Dayot Upamecano. He did get chances other than that which was ruled out, but his touch wasn't quite there and when he went clean through late on, he mis-kicked

Naglesmann is looking to evolve the side following his arrival and is largely continuing with the structure of predecessor Hansi Flick.

Bayern didn’t necessarily play the better football on the night, and they weren’t at anything like their best, but they had the superior nous and it ultimately told, with them being better in both boxes.

As you’d expect, their Bundesliga and Champions League hopes will once more rest on the shoulders of Lewandowski, who made all the difference.