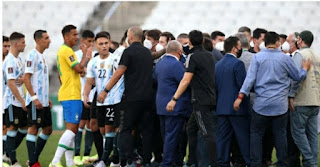 Brazil's health regulator said Giovani Lo Celso, Cristian Romero, Emiliano Buendia and Emiliano Martinez should have isolated after entering Brazil; three of the four started for Argentina against Brazil on Sunday; officials entered the field after kick-off, causing the game to be halted.

The World Cup Qualifier between Brazil and Argentina on Sunday night was abandoned after Brazilian health officials entered the pitch in a row over Covid rules.

The officials marched onto the field shortly after kick-off and confronted the Argentina players, who left the field while the two managers - along with Argentina captain Lionel Messi and Brazil's players - gathered to discuss the stoppage.

The South American football confederation CONMEBOL later confirmed the game - which was 0-0 when it was stopped - had been called off by the referee, who they said would submit a disciplinary report to FIFA.