PEOPLE CALL US INSULTING NAMES BUT THEY CANNOT FAULT OUR RESULTS, BISHOP OYEDEPO

Though They label Us Lunatics, Yet We Have Results As Evidence of Success– Bishop Oyedepo Reacts To Critics

Oyedepo stated that though he and his church had been insulted as mad people, they kept on making impact.

The President and founder of Living Faith Church Worldwide, Bishop David Oyedepo, has revealed why he does not mind his critics, including some media houses which he alleged quoted him put of context 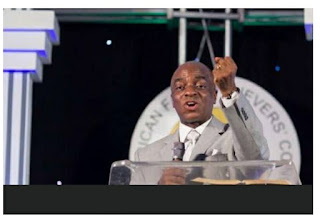 The cleric stated these during a sermon in the church,
According to him, fighting some media houses may metamorphose into having jobless persons who may demand prayer from him for a new job.

But in a new sermon during the week, Oyedepo said, “When I’m doing the things of God, how they feel is irrelevant. I’m privileged to be one of those who sustain the media houses in Nigeria because when they publish what I say, people buy it.

“I can’t fight them because if I fight them and they close down those houses, then I will be praying for them to get a job again. I’m having a good time having them market my sayings rightly or wrongly. It keeps a number of media places going.

“Hearing, I rejoice. Saying it is stupid, yet we are rising. Disgracing; impact is growing. (They say) We are all mad people; thank you, we are making it. And only fools doubt fools.”

Oyedepo had been criticised in the recent past over his sacking of some pastors of the church who were deemed to be failures after their inability to grow the new churches established.

Some of the sacked pastors had stated that Oyedepo’s ministers did not tell him the truth and engaged in devious means to shortchange them of their allowances as well as other anomalies.

Oyedepo had also come under fire over his comments on Feminist movements in the country, saying feminists should rather not get married than their desire to be equal with men.

The cleric’s stance on feminists had drawn knocks from feminist groups in the country which stated that the minister was misled and should not express his frustration with his pastors on the rights’ groups.