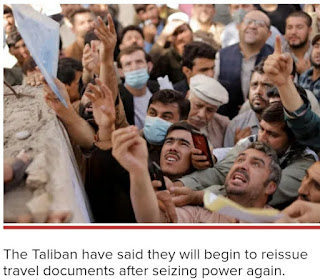 Hundreds of Afghans desperately hoping to leave their war-torn country descended on the passport office in Kabul Wednesday — a day after the Taliban announced they would resume issuing travel documents.

The crush of people was so great that Taliban security men beat back some people in the crowd to maintain order, according to Reuters.

“I have come to get a passport but, as you can see here, there are lots of problems, the system is not working,” one applicant, Mahir Rasooli, told the news outlet. “There is no official to answer our questions here, to tell us when to come. People are confused.”

The passport office had been closed after the radical Islamist group took over the government in August, stranding many people desperate to flee the country.

Office chief Alam Gul Haqqani told reporters Tuesday that up to 6,000 passports would be issued daily, according to the Washington Post. He added that the government also would release some 25,000 new passports that had previously been paid for.