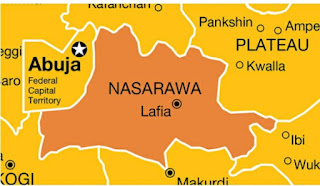 A house belonging to Enwongulu’s brother was reportedly set ablaze during the attack.

The Nasarawa APC chieftain, who narrated his experience to NAN, said four persons armed with dangerous weapons, invaded his residence in the early hours of Saturday.

“It was around 1:10 am today that I heard some voices at my door that I should come out or they will set my elder brother’s house ablaze, including mine,” he said.

"When I came out of the house, I saw four people with knives, cutlasses and big sticks. They told me that APC changed the result of the chairmanship and councillorship election in Wakama ward.

“They asked me to lie down and I complied, and they beat me to coma. When I laid down, two of the men were guarding me and the other two went and set my elder brother’s (Paul Angbazo) house that I am living in ablaze. As you can see, everything was burnt, but I thank God for saving my life.”

Enwongulu added that the thugs also threatened to kill him.

“They asked me to call Dr James Angbazo, the former APC gubernatorial aspirant, and tell him my last word on earth,” he said.

“When I called Angbazo’s number, he did not pick and they asked me to call any of my brothers to tell him that they will kill me.”

While speaking with Enwongulu on his experience, Usman Gboble, APC chairman in the area, said the party would report the incident to law enforcement agencies.

Candidates of the APC were declared winners of the chairmanship and councillorship positions in all the 13 LGAs of the state, on Wednesday.

They were sworn into office on Friday by Abdullahi Sule, governor of Nasarawa, at a ceremony held at the Aliyu Akwe Doma banquet hall.