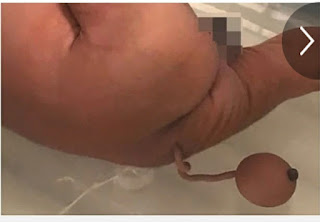 Medics at Albert Sabin Children's Hospital in Fortaleza, Brazil were stunned when a baby was born with a 4-inch fleshy tail - one of only 40 cases of the rare birth defect ever recorded

Doctors have removed a four-inch "true human tail" and a strange sphere hanging from a baby's bottom - in one of only 40 cases ever recorded. 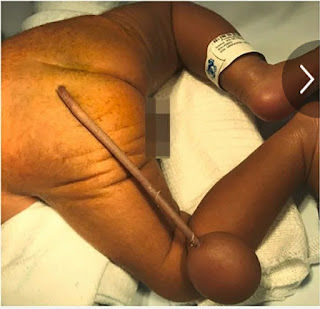 Medical staff were stunned when the infant was born with the stragne appendage at Albert Sabin Children's Hospital in Fortaleza, Brazil.

The child's birth and tail-removal surgery were pictured in the Journal of Pediatric Surgery Case Reports.

The fascinating images show the curious growth and include a detailed explanation of how it formed on the youngster's body.

According to the study, humans can have a "tail" while in the womb, but it's usually reabsorbed before birth.

But in some incredibly rare cases the tail continues to grow.