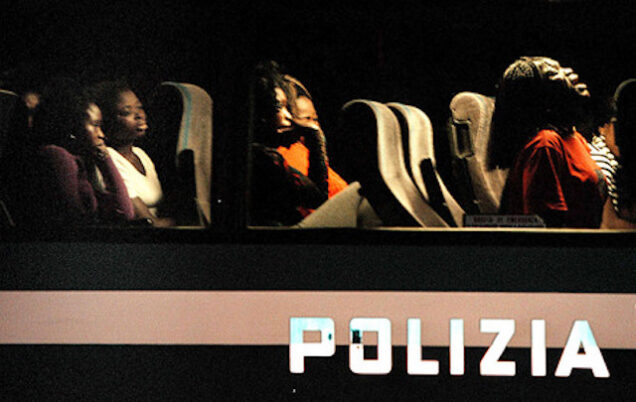 The Nigerian girls being forced into prostitution in Italy. Napoli Police Photo

Italian customs police on Monday dismantled a Nigerian organised crime syndicate that forced dozens of young women into prostitution and begging on the streets of Italy.

They then smuggled out millions of euros in ill-gained revenues to Nigeria, with cash hidden in suitcase handles or pasta packages.

The police said there were raids in cities in northern and southern Italy as well as on the island of Sardinia.

Police from Cagliari arrested 40 people in the probe.

They are also accused of using voodoo rites to control women, and money laundering.

They placed 120 people under investigation.

It has grown almost as rich and powerful as the country’s three main home-grown mafias, ‘Ndrangheta from Calabria, Cosa Nostra from Sicily and the Camorra from Campania, police say. (ANSA).

The investigation was sparked by the complaint of a Nigerian woman, brought illegally into Italy, that her fellow countrywomen were taking on debts as high as 50,000 euros ($56,000) to arrive, only to be forced into prostitution for the syndicate. While prostitution is legal in Italy, the exploitation of prostitutes is illegal.

The police in a statement said while the Nigerian crime syndicate was based in Italy, its operations extended to Germany, Libya and Nigeria.

Forty-one young women (were) assigned to prostitution, while nine were forced to beg,” the statement said.

To discourage the women from turning to authorities for help, they “were mistreated, put under control and put into a state of psychological vulnerability” by the use of macabre voodoo rites to guarantee they would pay off their travel debts, police said.