THE YOUNGEST MUM ON RECORD IS A PERUVIAN KID

Lina Medina is the youngest person on record to have a child
Youngest mum, 5, on record forced to have C-section to give birth to son

A Peruvian girl is the youngest mother on record after she gave birth at just five-years-old.

Lina Medina, from Ticrapo, a village in the Andes, had a baby boy via Caesarean section as her pelvis was too small for natural birth on May 14, 1939.

The harrowing story was unearthed via her medical records. Lina has declined cash offers to tell her story, despite being asked multiple times by newspaper reporters.

At the time, the young girl complained of stomach pains to her mother, Victoria Losea, a housewife, and doctors assumed she had a tumour.

It came to light that she was in fact seven-months-pregnant.

Her baby was born a healthy 6lbs and was named Gerardo after the doctor that delivered him.

Medics discovered Lina was able to fall pregnant due to a condition called precocious puberty, when a child’s body hits puberty prematurely. 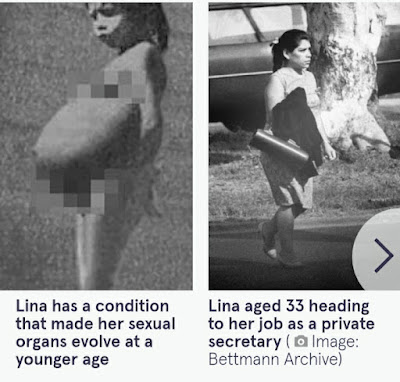 Her breasts were nearly fully developed by the age of four and she started having periods aged three, according to her mother.

However, a medical report from Peru logged the child’s menstrual cycle as starting at eight-months-old.

The father of Gerardo remains unknown although Lina’s own father, Tiburelo Medina, a silversmith, was arrested after the birth on suspicion of raping her. He was later released due to a lack of evidence.