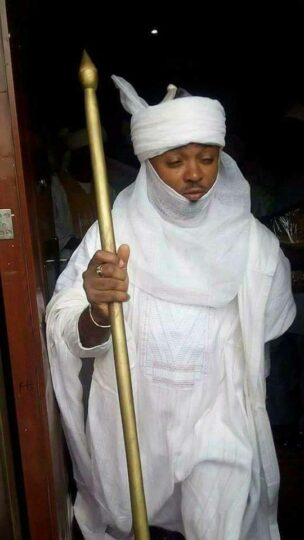 An attempt by operatives of the Directorate of State Security (DSS), to arrest a traditional ruler, HRH, Kadiri Omogbai, the Ogieneni of Uzairue clan, Etsako West Local Government Area OF Edo state, was on Tuesday resisted by youths of the community.

The incident reportedly occurred along the Auchi-Abuja expressway, when the traditional ruler was on his way to his palace.

The traditional ruler was alleged to have been involved in an attack on an unidentified person.

It was gathered that DSS operatives blocked the traditional ruler at Ayua junction on the road and attempted to drag him to their vehicle and whisk him away, when the youths stormed the spot and resisted the arrest.

Following the stiff resistance by the youths, the DSS operatives later took HRH, Kadiri Omogbai, accompanied by the youths to the office of the Police Area Commander at Auchi.

It was gathered that the youths mobilized other people and barricaded entry and exit points in the area to forestall any attempt to whisk away their clan head.

The embattled traditional ruler was later escorted by police operatives to his palace in Jattu, after several hours at the office of the Auchi Area Commander.

When contacted, the State Police Command spokesman, SP Kontongs Bello, who was apparently not in town, said he was yet to be properly briefed