WE HAVE TO BOOST THE REVENUE BASE OF THE GOVT., ADEFARATI CHARGES PUBLIC SERVANTS

I INTEND BOOSTING THE REVENUE BASE OF THE MINISTRY WITH BUSINESS IDEAS,  ADEFARATI.

Commissioner for Local Government and Chieftaincy Affairs, Chief Gboyega Adefarati has outlined his vision for the Ministry and the state at large, even as he appealed for the cooperation of the managent and staff to accomplish his goal. 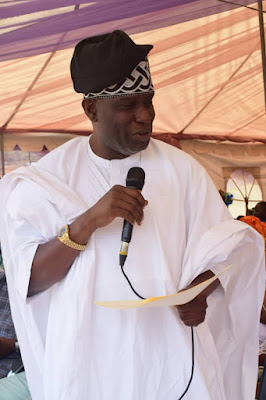 Chief Gboyega Adefarati
Chief Adefarati said he would employ his private sector background to boost the Internally Generated Revenue of the Ministry with innovative ideas.
The Commissioner disclosed this resolve at the New Year Prayer meeting of the Ministry held at its Conference Room.
He stressed that 2021 was a difficult year for the country as the effect of the Covid-19 affected the inflow of cash into government coffers. He added that  the way out of this dwindling allocation from the federation account and non payment of salaries, is to think outside the box and help the government generate more revenue internally.
Chief Adefarati commended Governor Akeredolu for his commitment to workers welfare through the payment of salaries and promotion of deserving public servants in time.
Earlier, the Permanent Secretary of the Ministry, Chief  Segun Odusanya had pledged the unalloyed support and loyalty of  members of staff of the ministry to the government and the Commissioner.
Odusanya vowed to be fair and reward committed members of staff, urging them to be role models in the discharge of their official assignments
In his homily, the Archdeacon of St. Thomas Anglican Church, Ven. Thomson Akinboro urged workers to shun ungodly acts such as; lackadaisical attitude towards work, laziness, backbiting, gossiping,  backstabbing  and be faithful in the little which God has committed into their hands so as to be blessed this year.