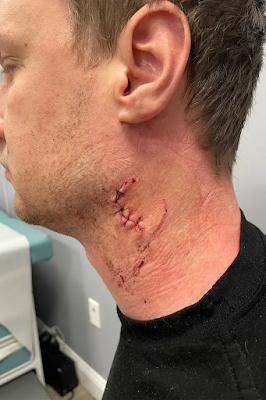 An enraged Ukrainian man stabbed a compatriot for speaking Russian at a Brooklyn bar in a booze-fueled spat that’s now being investigated as a hate crime, The Post has learned.

Andrii Meleshkov, who was born and raised in Eastern Ukraine and has a Russian mother, said he was at Signature karaoke bar in Sheepshead Bay celebrating a friend’s birthday last Monday when Oleg Sulyma, 31, sat down at his table and started hurling “profanities” at him and his buddies.

"You look Russian,” Sulyma, who is Ukrainian, sneered, according to prosecutors.

Meleshkov, a 36-year-old truck driver who left the Eastern Europe locale and moved to Brooklyn in 2015, insisted that he was Ukrainian but Sulyma didn’t believe him.

“We switched to Ukrainian in order to calm him down but it was getting him more and more agitated and he started asking us to translate words to prove that we’re Ukrainian,” Meleshkov said.

Sulyma demanded Meleshkov and his friends say the word “Palianytsia” — a type of Ukrainian domed bread — that native Russian speakers have difficulty pronouncing because of its combination of vowels and consonants, according to prosecutors and Meleshkov.

“If you get it wrong, I’ll have my way with you,” warned Sulyma, according to prosecutors.

Meleshkov, whose parents are currently hiding in a basement in Zaporizhzhia to escape the Russian army’s onslaught, said the word as he attempted to pay the bill and leave but Sulyma just kept getting “angrier and angrier,” the alleged victim claimed.

He grabbed sharp shards of glass from the broken bottles and he started advancing towards us and we realized that he’s serious and he’s going to start to slash us,” Meleshkov recalled.

“Everything happened in the blink of a moment. I thought that I was going to quickly get up and push him away and run away but then he lunged and I felt that he hit me in the neck.”

Meleshkov “realized something horrible had happened” when he saw blood streaming down his arm from slash wounds to his cheeks, ears, temple and neck that eventually required 17 stitches.

“I was screaming to call the police and the medics … everything was covered in blood and it was just insanity going on,” he recalled.

“I got lucky … the paramedics told me it’s my second birthday because the wound that was on the left side on the neck, it came really close to the carotid artery.”

Meleshkov took Sulyma to the ground and then “sat on top of him,” putting his elbow on his neck to stop him from attacking while he waited for police.

Sulyma, a construction worker who’s lived in Brooklyn for more than 12 years, was hit with felony hate crime charges and a slew of other raps, including menacing, harassment and criminal possession of a weapon