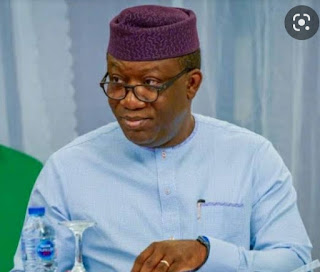 •We need at least 1million policeman to tackle insecurity, he adds

A presidential aspirant of the All Progressives Congress (APC), Governor Kayode Fayemi has described the reward system in the APC as poor.

Speaking in Ibadan, on Wednesday, while wooing delegates of the Oyo APC, Fayemi likened the reward system in the party to one where monkeys work while baboons are beneficiaries of the party goodies.

To retain the commitment and passion of party members, Fayemi said the party must fix its reward system such that those who work are rewarded with party patronages.

He also described it as discouraging to sustaining in the party, a situation where longstanding party members are discarded for moneybags who suddenly show up and are handed party tickets.

Fayemi said: “I believe our country is at a critical juncture and as a committed foundation member of the All Progressives Congress (APC), I know where the shoe pinches our members. I know the gaps that exist in the party that we need to address in order to maintain this solid party that we have which still needs a lot of improvement.

“This is the party, sometimes, where monkeys work and baboons eat the food. We need to ensure that those who do the work are also the beneficiaries of whatever patronages come into the party. That is the only way we can retain the commitment and passion of our party members.

“We also need to develop a successor generation platform so that the young ones in the party would see a pipeline in the leadership ladder and they know that if they do the right thing, they exhibit the values we are all promoting, it will come to their time and they will be able to serve in various capacities of the party not to discard of them after doing all the work because some moneybags just showed up and say he wants to go to the House of Assembly, House of Representatives and the young people who have been working so hard for the party all along don’t have the opportunity simply because they don’t have loads of naira to share to our people. These are the things that I believe we need to address.”

To effectively tackle insecurity, Fayemi said there is a need to decentralise the nation’s internal security architecture.

Noting that the federal police is overstretched, Fayemi advocated for the activation of local security especially the engagement of one million policemen in the country.

He also pointed to the need to retool the nation’s military to respond to threats, address inequality, and youth restiveness, and provide jobs for young people.

Fayemi decried contradiction in the nation’s constitution such that the federal government issues mining licenses whereas the state owns the land where mining is done.

Fayemi said, “Whether you call it multilevel policing, state policing, what I am concerned about is we must have security that is devolved at all levels in which control is also retained at the local level.”

Speaking, Oladokun said, over the years, Fayemi had always brought to bear his rich education, intellect, exposure, and experience in positions occupied

Oladokun described Fayemi as a Nigerian project, one who is able and capable and one who had proven himself as a leader of the Nigeria Governors Forum (NGF), as minister and governor.

In his brief remarks, Teslim Folarin said since years back, Fayemi had shown that he is destined for the top public office in the land.

Folarin said Fayemi fits the bill to address present challenges, adding that he is positive that the Ekiti governor will emerge the APC presidential candidate.

In spite of the huge investment in the water sector by the government and international organisations, water scarcity has grown to become a perennial nightmare for residents of Abeokuta, the Ogun State capital. This report x-rays the lives and experiences of residents in getting clean, potable and affordable water amidst the surge of COVID-19 cases in the state…Reward system in APC  Reward system in APC

The Lagos-Ibadan railway was inaugurated recently for a full paid operation by the Nigerian Railway Corporation after about a year of free test-run. Our reporter joined the train to and fro Lagos from Ibadan and tells his experience in this report…