My father gave me the greatest gift anyone could give another person, he believes in me,  Hon Omowunmi greets father at 99. 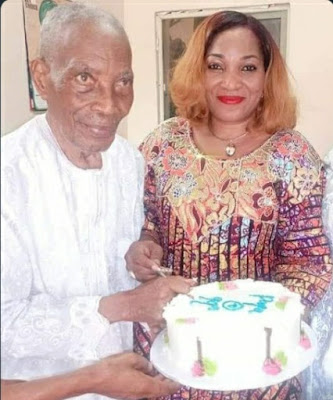 The founder of MyChoice Group of Companies and former Commissioner for Women Affairs and Social Development in Ondo State Hon. Princess Omowunmi Olatunji-Ohwovoriole  has  congratulated her father, Pa. Samuel Olatunji Eddo as he marks his birthday today, June 12, 2022.

In a statement personal signed and made public by Hon. Omowunmi, she described Pa Samuel Eddo as a  great man of many achievements saying her father gave her the greatest gift anyone could give another person, she also stressed that her father believed in her.

As a father, he is very caring, loving and compassionate. He is also a great disciplinarian, who embraced the position of the bible that says 'train your children the way they should go that when they are old, they will not depart from it'.

He has trained all of us very well which was what he needed to do and I believe that's what he is enjoying from us his children today. If he was not as strict and fair with us then, when we were growing up, I doubt if we would be where we are today.

The Akure Princess who also used the opportunity to wish him many more fruitful years, prayed for good health as he continues to age gracefully.