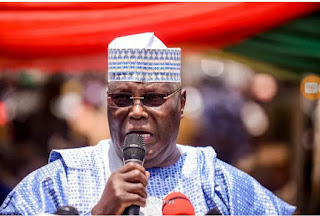 A video is currently ciruculating on social media especially WhatsApp, insinuating that northern governors of the All Progressives Congress visited the presidential candidate of the Peoples Democratic Party (PDP), Atiku Abubakar on Wednesday after APC presidential primary at Eagle Square.

The APC national leader and former Lagos State Governor, Asiwaju Bola Tinubu, emerged the party’s presidential candidate at the end of the exercise.

The video was captioned “THE GAME JUST GET STARTED.”

It reads further, “APC Northern Governors and Senate President went to visit Alhaji Atiku Abubakar immediately after their APC Presidential Primaries this morning when Tinubu was declared the winner of APC Presidential Ticket

“Northern blood brothers remain, Northern blood brothers, thes people might handover a life snake to Tinubu. There are two things they are going to do to make sure the north retains power, they are either going to start decamping to PDP or remain in APC and work against Tinubu’s interest. North and power are cousins. You don’t trust them when it comes to that.”

However Checks revealed that the video was first taken in January this year during a condolence visit.

Using Invid, a video verification tool, Daily Trust established that the video first surfaced on the Internet on January 22, 2022, when Atiku paid a condolence visit to the family of Dahiru Mangal, a business magnate in Katsina who lost his 85-year-old mother.

The late Hajiya Murja Bara’u was the mother of Alhaji Dahiru Mangal who is the Chairman of Afdin Group, owners of Max Air, Afdin Petroleum, Afdin Construction, among others.

Also Daily Trust traced a tweet by the former vice president on his Twitter handle @atiku where he confirmed the condolence visit on the same day.

The tweet read, “Earlier today (January 22), I paid a condolence visit to Alhaji Dahiru Mangal in Katsina over the loss of his beloved mother and matriarch of their family, Hajiya Murja Bara’u. I pray that Almighty Allah will comfort the family and grant her Aljannah Firdaus in Paradise.”

The video currently in circulation is an old video from a condolence visit by Atiku and some northern APC governors to the family of Alhaji Dahiru Mangal and the video is being recycled. As such, the claim in the video that northern governors met with Atiku after Tinubu’s victory at the APC primary is false and misleading