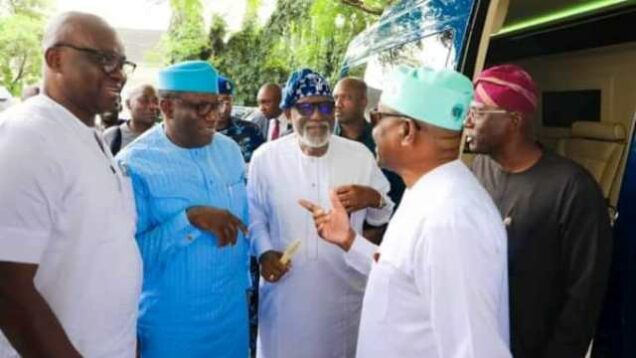 The governors with Wike

Three governors of the All Progressives’ Congress (APC) on Friday stormed Port Harcourt, Rivers State to meet with Governor Nyesom Wike behind closed-door.

The governors are Babajide Sanwo-Olu of Lagos, Dr. Kayode Fayemi of Ekiti and Rotimi Akeredolu of Ondo State.

The three governors were accompanied in the visit by former Governor of Ekiti State, Ayodele Fayose.

The visit might not be unconnected with the 2023 general elections, especially the presidency.

The visit fueled speculations that Wike may be on his way to the All Progressives Congress or may tactically support the presidential bid of Asiwaju Bola Tinubu.

The governors met behind closed doors at Wike’s private residence in Port Harcourt.

Wike who lost out in the race to become the Presidential and Vice Presidential candidate of the PDP in the 2023 general election has been receiving visits from politicians across political parties.

He is currently at loggerhead with his party for snubbing him for Ifeanyi Okowa as the running mate to Atiku Abubakar.

There were rumours recently that Wike who was on vacation in Turkey flew to France where he had a meeting with Tinubu.

This was later debunked by the Tinubu’s camp. Today’s visit may lend credence to the assertion that Wike actually met with Tinubu.