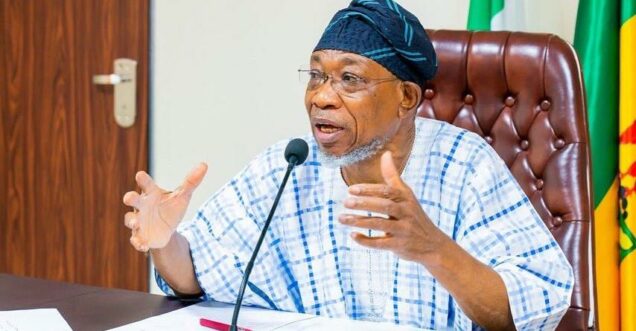 Minister of Interior Rauf Aregbesola appeared to have gloated over the electoral loss of Osun state to the Peoples Democratic Party by his All Progressives Congress.

In a post on Facebook Sunday, Aregbesola justified the victory of Ademola Adeleke, over incumbent Governor Gboyega Oyetola, by uploading a Biblical verse.

He wrote: “This matter is by the decree of

He wrote: “This matter is by the decree of the watchers, and the demand by the word of the holy ones: to the intent that the living may know that the most High ruleth in the kingdom of men, and giveth it to whomsoever he will, and setteth up over it the basest of men.” – (Daniel 4:17).

The post was made at about 8a.m, just moments after the Independent National Electoral Commission confirmed Adeleke as the winner and governor-elect.

Aregbesola and Oyetola and the national leader of the APC, Asiwaju Bola Ahmed Tinubu have had some frosty relationship in the state.

The minister even sponsored Alhaji Moshood Adeoti, a former government secretary to compete against Oyetola in the party’s direct primary.

After Oyetola’s victory, Adeoti dragged Oyetola to court, seeking an order to disqualify him for not resigning early enough from the party’s national caretaker committee.

The case was thrown out by the court on Thursday.

Then Aregbesola left the country to the United States, making himself unavailable for the election in his