HARRY SALVAGES A POINT FOR TOTTENHAM AT CHELSEA 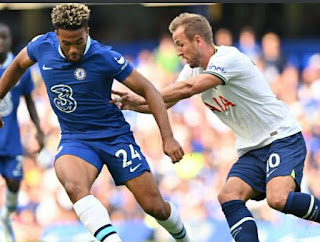 Football can be a crazy sporting activity. A team leading for eighty-something minutes can still be held or end up losing within a twinkle of an eye. Tottenham football club forced Chelsea to a pulsating 2-2 draw at Stamford Bridge this evening. The last-minute equaliser came off a header by Tottenham talisman and captain, Harry Kane. The striker had been kept quiet, almost unanimous for most of the ninety minutes. But just as the vociferous, jubilating Blues fans were counting the seconds for a deserved victory, the Englan international rose above sea of heads to nod in a cross. Never write off a reputable goal poacher until the referee's final whistle. The goal was cruel to Chelsea, who had shown more desire and determination to carry the day.

Right from blast of the whistle, commencing the star-match, Chelsea took the match to the visitors attacking from right left and centre. They made effective use of the wings with Loftus-Cheek as the tormentor-in-chief on the right. Sterling was also giving the Tottenham defence a tough time with his familiar dribbling runs. The Blue's new left wing-back, Marc Cucurells displaying good overlapping runs with quick exchange of passes and interceptions. Not many will miss Alonso if the Afro-haired defender can improve on his crosses and hunger for goal. The visitors were not allowed to exchange passes at all. It was like what we used to call 'half field ni won bawon gba.' Chelsea laid a siege on the Tottenham defence. The home side had misses and near-missed. Tottenham tottered, really. The first half ended 1-0 in favour of the Tuchel-tutored side, courtesy of new boy, Koulibaly. It should have been more. The Blues still need a good striker to crown their good positional football.

The second half saw Tottenham in a different style. They came out of their shell and attacked. Chelsea still had the better of exchanges, though but the cutting edge was still missing. Pierre Holbjerg got the equaliser in the 68th minute. This appeared to ginger the homers as they upped the tempo of their forays into the Hugo Lloris goal area. Four minutes after, Reece James. He benefitted from poor defending of the Conte boys. The goal sent their fans into  defeaning celebrations.

It then became a ding-ding affair as Chelsea played to wind down the clock, while Tottenham searched for the equaliser.

The all important goal was provided by Harry Kane, who managed a header off a new-buy Perisic corner kick.

As the players were giving the fans full value for their money, the managers-Tuchel and Conte were roughing up each other by the sidelines. Both men got the matching orders after Harry Kane's equaliser.