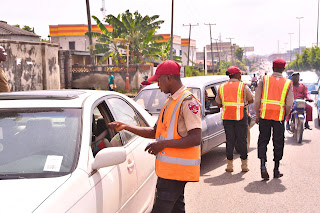 The execise, which commenced in Akure South local government area on Tuesday, was carried out along Oyemekun and Arakale roads as well as Alagbaka axis of the state capital.

Speaking with journalists during the enforcement, the State Licencing Officer (SLO) of ODIRS, Mr Samuel Olajide said  essence of the exercise is to enforce road users compliance with traffic laws. He added that the traffic laws are so clear that any vehicle that will ply government road must have been registered and have a valid document.

We're carrying out this exercise because the government is concerned about the safety and security of lives of our people. These people carrying out criminal acts  can easily be tracked if vehicles owners have valid documents".

He stressed that the ODIRS collaborated with  Vehicle Inspection Officers and others as they are the ones saddled with the responsibility of inspecting vehicles under the law. While urging the people found guilty of one offence or the other to do the needful, Olajide noted that the enforcement exercise is quarterly.

Mr Adeniyi Adenegan, the officer in charge of the enforcement noted that the Vehicle inspection Officers and the ODIRS are partners in progress.