The town of Ile-oluji  in Ondo State came alive on Saturday when the State Commissioner for Finance, Hon. Wale Akinterinwa and others were honoured with Ile-oluji National Merit Award for their immense contributions to the development of the town. 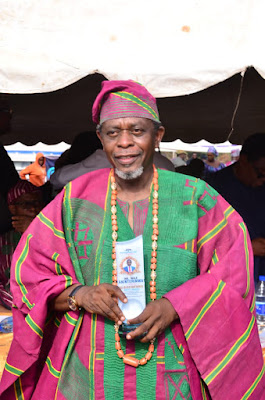 The honor was conferred on them during this year's 33rd Ile-Oluji Day celebration, held at the playing ground of Gboluji Anglican Grammar School, Ile-oluji, Ondo State.

Speaking at the event, the Ondo State State Governor, Arakunrin Oluwarotimi Akeredolu, SAN, reiterated his administration commitment towards providing a conducive environment for the development of all the communities in the state, irrespective of thier political affiliation.

Governor Akeredolu who was conferred with an award as a distinguished friend of Ile-Oluji kingdom, was represented by his Deputy Governor, Hon. Lucky Aiyedatiwa.

Arakunrin Akeredolu who felicitated with the Monarch, Jegun - in - Council, sons and daughters of the town, emphasized that his administration will continue to provide adequate security, infrastructure and other dividends of democracy for the development of the people across the state.

He praised the leadership role of the Monarch in maintaining peace and  tranquility within the ancient town and other various development projects recorded under his reign, noted that the town ranks among the communities in the State with minimal disputes.

The Governor noted that the town has benefitted immensely from his administration in terms of infrastructural development and appointments of indigenes to various positions in his government.

Earlier in his address, the Jegun of Ile-oluji, His Royal Majesty, Oba (Dr.) Olufaderin Adetimehin JIKOMO II stated that Ile-oluji Day Celebration has over the years provided a veritable rallying point for all indigenes at home and abroad to interact and engage on development plan of the town.

Oba Adetimehin noted that since he ascended the throne of his forefathers, his transformation agenda which was anchored on the three Rs of reconciliation, reformation and repositioning, has started yielding appreciable results.

The Monarch who appreciated the support and encouragement of the Governor, Arakunrin Akeredolu towards the town, also thanked all development partners and other stakeholders for believing in his vision and supporting its implementation.

In response to his award, the Commissioner for Finance, Hon Wale Akinterinwa thanked the traditional ruler and all indigenes of the town for the confidence repose in him.

Hon. Akinterinwa, who noted that his late father was also given the same award when he was alive, promised not to let the people of the town down and assured that the award will spur him to do more for the town in particular and Ondo State in general.