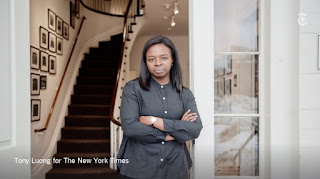 It has been 27 years since the first black man, an older student by the name of Barack Obama, was elected president of the prestigious Harvard Law Review. It has been even longer — 41 years — since the first woman, Susan Estrich, was elected to the position. Since then, subsequent presidents have been female, Hispanic, Asian-American, openly gay and black.

Only now, for the first time in the history of the venerable 130-year-old journal, is the president a black woman.
ImeIme Umana, 24, the third-oldest of four daughters of Nigerian immigrants, was elected on Jan. 29 by the review’s 92 student editors as the president of its 131st volume.
The Harvard Law Review — which, like other law reviews, allows students to hone their legal writing skills and gives scholars a forum in which to thrash out legal arguments — is often the most-cited journal of its kind and has the largest circulation of any such publication in the world.
Its presidency is considered the highest-ranking student position at the ferociously competitive law school and a ticket to virtually anywhere in the legal realm. Half of the current Supreme Court justices served on the Harvard Law Review, though none as its president.
“It still feels like magic that I’m here,” Ms. Umana said in an interview, though her fellow students said it was not magic at all but her sharp legal mind, intense work ethic, leadership ability and generosity of spirit that catapulted her to the top.
Ms. Umana’s emergence now has raised questions about why it took so long for a black woman to reach the pinnacle of the review and how her perspective may influence a publication that has for most of its existence been led by white men.
When Ms. Umana talks about the law, she speaks through the prism of her race and gender. Not far from her mind are the black women who in recent years died after encounters with law enforcement.
“I’m constantly reminded of people like Natasha McKenna and Tanisha Anderson and Sandra Bland, whose relationships with the law were just simply tragic,” she said.
Unlike the vast majority of graduates of the nation’s top law schools, Ms. Umana says she has no interest in joining a high-paying corporate firm. Her dream for now is to become a public defender, a goal she set after an eye-opening internship last summer in the public defender’s office in the Bronx. She plans to work this summer with the public defender in Washington.
“A lot of the clients I worked with that summer and since have looked a lot like me,” she said. “They are disproportionately represented on the unfortunate end of the legal system, so it struck a little closer to home.”
Born in State College, Pa., Ms. Umana graduated from Susquehanna Township High School in Harrisburg, where her father, who died in 2010, was a statistician for the state. She is a 2014 graduate of Harvard College, where she majored in government and African-American studies.
She was elected president of the law review in an intense 12-hour period of deliberations that stretched over two days — typical for this annual process — and included a rigorous evaluation of each candidate’s portfolio of work and responses to a written questionnaire, questions at a candidate forum and a writing exercise.
Ms. Umana was one of 12 candidates for president, including eight minority students and eight women.
“I think our team saw in her what so many people have seen in her fo