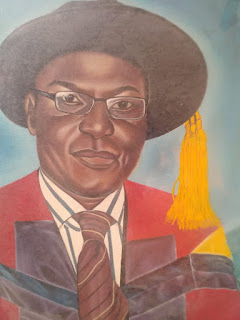 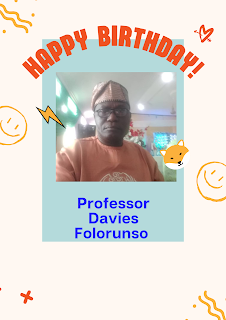 There are two, no three ways through which people get to the top in life.  One is being bequeathed with parental inheritance. Another way is through other persons who turn their fortune around for better. The last is what i call the anirares (literally: who have themselves). In reality, it refers to individuals, with no help or talent, but are able to attain great heights by dint of sheer hardwork. Professor Davies Folorunso, (whom i will refer to as Dayo heretoafter) belongs among the Anirares. Life is all about offers, yes offer of choices; we are given options to follow paths we consider good for us. Anything that happens, no matter the gravity, is more often than not, given as excuses for our failure, inability and refusal to do the needful. Yet, no occurrence, happenstance or event shapes the life of man or be allowed to do so. But, most people dwell so much on these minute issues so much that they take their eyes off the future and the beauty it has in stock.

How Davies Folorunso became a Professor has its root in personal discipline, burning desire and sterling ambition. William Shakespeare advised that 'ambition should be made of sterner stuff.' His peregrination to FUTA, where he has attained the apogee of his chosen-career, teaching, is a culmination of withhunting and discrimination. Upon getting his Master's Degree, he took up a teaching appointment with the then College of Education, Ikere Ekiti. How and why he left is elaborated upon below

Dayo's is among the friendship which blossomed as an offshoot of my close-knit relationship i cultivated  with Abayomi Ojo, though we knew each other hitherto. Among the acquaintances i made directly or through others, he was privileged. His fortune was having a father, a man who was in charge of providing for his family members. Most of my friends did not. His father, the late Mr. Folorunso trained Dayo through primary, secondary and A Levels. Death, unfortunoately layed its icy hands on the breadwinner of the Folorunsos and took him away in 1987. Then, all of us were still trying to find our bearing. Though many had left Secondary School as far back as five years before, none of us had gained admission into the University. On reflection, Dayo had always thirsted for the good life. A year preceeding his father's demise, he sat for the Nigerian Defence Academy (NDA) examination and passed. He scaled through the physical exercises only to be denied at the last minute over a blurry year of birth on his papers.

Becoming a Professor is attainment of the highest height achievable and crowning of his efforts in his beloved profession. Even with only A/Levels certificate, he was already imparting knowledge in students. He taught at Akure Secondary Commercial  School. Dayo was among the first set of people, who organised private lessons for students in Akure. He was once a tutor at the Continuing Education Centre (CEC). It is gratifying to establish here that our Professor gained admission into the prestigious University of Ife, (now OAU), to read Metallurgical Engineering just a few months after losing his father.

Dayo was never satisfied with half measure. Fully aware of his capabilities and the treasure in him, he has been moving on progresively, acquiring knowledge and certificates along the way. After searching in vain for an institution of higher learning, where he could lecture in his beloved city of Akure, he headed for the College of Education, Ikere Ekiti. Life was going on well until a new Provost was appointed to take charge. For three to four years, the Provost denied him promotion. When asked, he said Dayo had no teaching certificate, though he was a Masters Degree holder. Pronto, our friend went further and got a Post-Graduate Diploma in Education. Yet, the high-handed Provost stood his ground. That was how he put paid to his relationship with Ikere as he headed back home and found solace in FUTA, after about ten years. He however got a lifetime treasure in the city of Ogoga. More on this later.

Dayo comes across everyone as a free mixer. In all ramifications, he is. All his friends, whom he has had a relationship with for decades, are still close to him. He cherishes relationships and keeps them. This gentleman holds me in awe at times as he avoids what can result in confrontation, deliberately.

If you call him jovial, comical and funny, not many who know him will disagree with you. He takes every happenstance in his strides. Hardly have i ever seen him lose his temper and throw up tantrums. These are traits he imbibed from his father, who happened to be my mother's supplier of drinks. What an easygoing and convivial man he was!

Dayo is modesty personified. He is not a sot, neither is he a teetotaller, not a religious fanatic but a Christian. He isn't a cassanova/womaniser but he is not a saint in women matters, either. To those who might not know, he is a politician of sorts. I am not surprised that he is not wholly into politicking. Dayo is not favourably disposed to getting things freely or without working for such. Furthermore, do not be deceived when Professor Davies listens attentively to you, even if you know he is aware that you are not being truthful. In the early days of this political dispensation, he could not fathom the motive of a friend who lied against an individual Dayo knows. I am sure that experience influenced his loose politicking.

Dayo savours mixing with friends and acquaintances alike. He is a member of various clubs in Akure. To him, life is to be enjoyed and not endured. I wish i can come up with what you can do to provoke and make him begrudge you. He is beyond that. His profound understanding and perception of man and life is his forte. Whenever occasion demands it and you need to clarify issues about the character of any of his friends, his unbiased, unequivocal and truthful exposition will convince you that he has a full grasp of the character of all his friends. I can now see why he does not get offended by them.

Dayo's nature abhors turbulence and distruption. This influenced him to be selective in picking a wife. He has been on the lookout for a wife since the mid-80s even while schooling. For him, it was a girl at a time. When he finds one unworthy of his heart, he ends the relationship and moved on. When he and Yinka became lovers and i met her, i told him my mind. The concersation went thus:

That conversation in Akure dialect centred around me telling him that his then new girlfriend called Yinka was the answer to his search for a good girl to marry. A few months after, they wedded at an elaborate ceremony that shook Ikere in 1998. His sartorial elegance focuses more on the dainty side. Always neat and with colours to match and compliment his look, he is a super dresser.

He once worked with the Environmental Task Force in Akure. At a later date, he was employed as the Engineer of Delco Steel and Wire industry. How he came to be employed here is interesting. Dayo had been engaged to tutor one of the children of the CEO to enable him pass his WASC after many attempts. To God be the glory, the boy passed the exams in flying colours. The boy's father, Chief Dele Aluko invited the youthful Dayo to his house. He said, 'young man i learnt you have a degree in engineering. You are hereby employed in my company; come and resume tomorrow.' Dilligence has its reward.

The Anirare i mentioned earlier is an Akure dialect word. It encompasses everybody, who trudge on in the pursuit of mission with no help coming from anywhere. The sudden departure of Pa Folorunso was a shattering experience capable of scuttling the dream of many youths to have university education. But for Dayo, it was thrusting the baton of responsibility on his tender and slim shoulders. And he picked up the gauntlet and powered on. Isn't it said bi owo oba kuro lawo ayo lo maa nkehin? (So long you keep eating, you will be filled) His unenviable position was further compounded being the eldest child of his parents. To him, it was an event not a life defining one. Almost single-handedly, he trained himself through university education, to Masters Degree and thence to Doctor of Philosophy (Phd) 2012 and was awarded the title of Professor in 2021. What a feat! The part-time classroom teacher, who was thrusted with the responsibility of a man earlier than his contemporaries, having lost his father, walks tall and  reached the pinnacle of his career. It has been a long, energy-sapping but enjoyable ride for him.