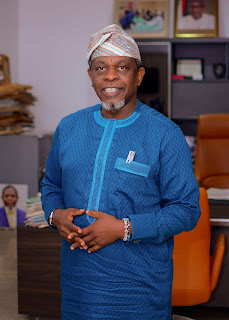 Life is filled with individuals, who live as they see it. Many take life as a comedy, another set see it as opportunity to bless others while the last see live for themselves alone. To the first set, making people happy is their forte; they are lively, effervescent and fun to be with. There is no full moment with them. They do not take life as a serious matter.
The second group are loved by people who meet, associate or have any dealing with them due to their large heart. Life to them means sharing.
The last group are called niggards by Americans. Every avenue they have is to benefit themselves. Plight of the less opportuned, their friends, the poor and their subordinates mean nothing to them. Most of our people, particularly in position of leadership fall within the last set. That is the reason suffering is spreading across the land.

Mr. Wale Akinterinwa, the  Commissioner for Finance in Ondo State belongs to the second group mentioned above. I had been hearing about his love for giving since 2014. I was posted to the Ministry of Finance as Head Media unit. Our elders in Yoruba say, when people miss those who have left, it means those present are not doing well. The typical Nigerian politician or office holder only mouth service, their activities are at variance with  such claimsf. Wale Akinterinwa is not your archetypal politician. He takes care of his subordinates as babies. No wonder, they profess their respect, love and admiration for him, openly.
As I gathered, he used his eight months to lift up his subordinates materially and socially. He did that to such an extent that four, five, six years after his tumultuous, sudden and shocking removal from office, his immediate staff still missed him. They talk of his eight months with fond memories

He is a fortunate man and he does not take it for granted. After being sacked from office in 2010, he went into the cooler but he did not quit politics. Fate brought him back to that same influential office after seven years and some months. This time, more matured and better equipped. Mr. Akinterinwa was among the first four commissioners that Governor Akeredolu first re-appointed for his second term. The glory of the latter house shall be better than that of the former. His return was greeted with applause and fanfare when he resumed last year. He has earned the trust of Aketi and the trust of the staff.

Aside giving, the Ileoluji-born banker-turned politician relates with all and sundry with ease and respect. He is a good listener. His disposition and mien to everyone who approaches him is another plus. His position and possessions have not gone to his head to make him feel like a tin-god. Always cool as cucumber, your communication with him will not put you under pressure or make you feel ill at ease.

When I see people, who decided to be different from others, they deserve mention. Mr. Wale Akinterinwa is a gold fish and an asset this government, a blessing to his community and Ministry of Finance as well as his subordinates. It should not surprise anyone that Ile-Oluji honoured him with National Merit Award last year based on his immense contribution to the progress of the town.

Happy birthday, Honourable Commissioner. May the good Lord pay you back in hundred-fold the joy you give to others. May you continue to soar and excel in all your endeavours in Jesus name.