Ryan Giggs 'threw a laptop at his girlfriend's head', threatened to share sex videos if she didn't reply to messages and 'dragged' her naked through hotel 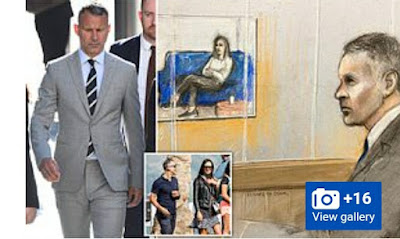 Kate Greville broke down in a police interview where she described how Ryan Giggs twice 'dragged' her out of a hotel room and dumped her in the corridor naked in rows over him texting and flirting with women - including one occasion where he allegedly kicked her in the back and threw a laptop at her head, a court heard yesterday.

The former Manchester United star, 48, was in the dock at Minshull Street Court where he is accused of controlling and coercive behaviour against his ex-girlfriend between August 2017 and November 2020. He is also charged with assaulting Ms Greville and her sister Emma. He denied all charges.

Today the court was played Ms Greville's 105 minute interview with detectives in November 2020 after he allegedly headbutted her at his £1.7million.

She described how they started having an affair having bonded over their unhappy marriages. They were 'soul mates' and 'best friends' when they first got together, she claimed, but the three-year relationship would later become 'toxic' and 'coercive'.

Ryan Giggs had 'full-on relationships' with eight women during his time together with ex-girlfriend Kate Greville, a court has heard.

Ms Greville, 36, said she made the discovery on his iPad shortly before she decided to leave him.

While scrolling through Giggs' tablet, she said she saw messages to his friends calling her a 'slag' and 'silly cow' and a message in which he said he needed the 'bars to open' so he could go on the 'pull'.

She was interviewed by detectives weeks after she claimed Giggs, 48, headbutted her at his home in Worsley, Greater Manchester.

Giggs constantly denied he was cheating on her, she said, but she 'needed to know the truth' as she checked on his device.

She said: 'The reality of what I had found on that iPad was way worse than I could imagine.

'Eight women he was having affairs with while he was with me. Full-on relationships.'

Kate Greville then said she decided to leave him while he was away managing Wales.

She said: 'It was all there in black and white. I knew if I even brought it up he would deny it.

'I knew he was going away to manage Wales, about four weeks after I found out, so I just put a plan in place to leave.

'I sorted out a new flat, I wrote him a letter which I never got the chance to send.

'I knew if I confronted him about anything, it would just kick off.

'I just made a plan to leave, and I kept it in for three weeks, which sent me under. I just needed to take a bit of control.'The 'cycle of abuse' included an email he sent to her titled 'blackmail' with a video 'we had done' and a threat to share it, she claimed, adding: 'He'd say: 'I'm going to send these messages to people if you don't reply'.'

Ms Greville also said: 'He wouldn't leave me alone, there was never a time when he didn't want to have sex'.

She alleged that in a London hotel room Giggs once 'kicked me in the back so hard that I flew off the bed and landed on the floor'. She then claims he 'dragged' her while naked into the suite area of the room.

'He got my bag with my laptop and threw it at my head', she told detectives, alleging that Giggs then locked her out of the hotel room naked, before letting her back in about 10 minutes later before having sex.

Ms Greville told police it happened when she accused Giggs of flirting with other women in her presence. She said: 'I don't know whether he did it to make me jealous. He would completely ignore me and he would speak to everybody else. He would also flirt with my friends'.

She claimed he told her that he would ask whether it 'bothered' her when she flirted with them. Later she challenged him and claimed that Giggs told her it was 'over' and that she should apologise.

'I ended up saying sorry because he made me feel that bad,' she said.

After challenging him about the alleged back throwing, she claimed Giggs replied: 'He was like 'yeah, because you accused me of flirting'.

'He didn't say you deserve it, but you made me do it. And then I felt like it was my fault'.

Recalling a row when they were staying in an Abu Dhabi hotel, she said: 'I asked him 'are you messaging a girl?' She said Giggs threw her out the room while she was naked and said: 'He flipped, went right up to my face and said 'how f***ing dare you, it's my daughter. We're done, we're over'.'

'He grabbed me by my wrist, so hard, literally dragged me to the lounge and dragged me off the floor. He threw all of my stuff, all of my make-up in the corridor and shut the door and wouldn't let me in', she said.

The police interview began with Ms Greville describing how she had met Giggs in 2013 when she was working for a PR firm, in which Giggs was one of their clients.

They had an affair while she was married and Giggs was still wed to wife Stacey. Their relationship began after her mother asked her to get a shirt signed, she said.

Ms Greville told police she left her husband after falling in love with her 'soulmate' and 'best friend' Giggs before 'red flags' emerged and he began calling her a 'whore' and accused her of 'f***ing someone else' if she didn't see him.

She said Giggs made her feel 'paranoid' and 'like a psycho' when she confronted him over repeated affairs, claiming at one point he had two other girlfriends he was seeing behind her back.

On one occasion she confronted him and he called her 'weak' for believing it. And as the relationship went on she alleged he bombarded her with sexual messages and photos and then threatened to publicly share explicit videos of them together.

She said: 'He'd come to my house in the morning, we'd have sex, it felt like he was just using me for sex. He wouldn't leave me alone, there was never a time when he didn't want to have sex. He'd come round to mine to have sex, then flew to Barcelona with a different girl.

'One minute he would be like, 'you're abusive, this is never going to work', and then he'd be sending me naughty pictures.

'If I didn't reply to him, I'd get a lot of abusive messages. He sent me an email once with blackmail [as the subject line] and it was a video of what we'd done. He'd say: 'I'm going to send these messages to people if you don't reply'.'

Giggs also 'did this gaslighting thing' that was 'very subtle' and 'constantly criticised' her, including how she loaded the dishwasher and how she made the bed, she told police, adding: 'It was like I was a housemaid, I was his staff member'.

On Day 2 of evidence at Ryan Giggs' trial, the court heard evidence from his former lover Kate Greville, who said: