With 59,190 applicants, University of Lagos recorded the second highest admission request this year. 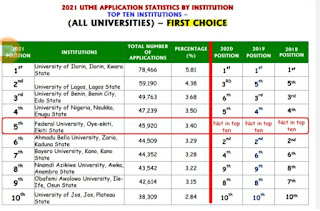 For the fifth year running, the University of Ilorin ranked as Nigeria’s most preferred university by admission seekers in the country, data published by the Joint Admissions and Matriculation Board, JAMB, has shown.

This year, the university had 78,466, which is about 6 per cent of 2021 admission seekers, jostling for admission into it, according to JAMB.

This perhaps explains why the university prides itself as “the university of first choice,” and the continuous preference of the university may not be unconnected to the school’s relatively stable academic calendar over the years as the school’s staff did not embark on strike for years unlike other public Nigerian universities.

However, that streak may be on the line now. Last March, after about two decades, the UNILORIN academic staff joined their colleagues in the Academic Staff of Nigerian of Nigerian Universities (ASUU) in an industrial action that lasted months.

From last year’s admission record released by JAMB, as of August, only 19 per cent (13,634, the highest number of admission by any institution in the country in 2020) of applicants to UNILORIN had gained admission.

With 59,190 applicants, University of Lagos recorded the second highest admission request this year. This is a move by one place from third in last year’s admission request, even though this year, fewer number of students sought admission from the school.

The 2020 admission record showed that UNILAG admitted 7,815, some 17 per cent of its admission seekers, as of August.

The University of Benin, with 49,763, placed third with 49,361 admission seekers. Save 2020, this means UNIBEN has maintained third place since 2017. As of August, from last year, about a quarter of its admission seekers had been offered admission