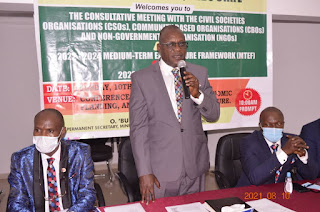 Ondo State Government has reiterated   commitment to harness her abundant  human and natural resources with a view to securing a bright future for the state and her people. It also expressed intention to transform the state to one of the most developed in the country through strategic implemention of projects and programs.
The Permanent Secretary, Ministry of Economic Planning and Budget, Chief Bunmi Alade stated this during consultative meetings with various representatives of people and other critical stakeholders across the 18 Local Government Areas of the State on 2022 - 2024 Medium Term Expenditure Framework and 2022 budget preparation.
The consultative engagements which took place in all the five zones involved the  representatives of Community Leaders, Traditional Rulers, Civil Society Organizations (CSOs), Non- Govermental Organizations (NGOs) Community Based Organizations (CBOs) Trade Unions, Organised Private Sectors, Professional Bodies, Women Organizations, Youth Groups, Vulnerable Groups and other relevant stakeholders in the State.
Chief Alade explained that the development, which was in compliance with the State Fiscal Responsibility Law, 2017 and continuation of the lofty idea of inclusive governance of the Arakunrin Oluwarotimi  Akeredolu SAN administration in the State that necceciated the strategic consultative engagement process.
According to him, the program was designed to collect their inputs and opinions on the fiscal policy of the state in a bid to ensure a prosperous Ondo, declaring that the people's feedback on what was being done and what to do to expand fiscal space of the state would assist the government in making decisions, create wealth for the people and reverse the trend of huge infrastructural deficit as well as ensure a better and brighter future for the next generation of the citizens.
He explained that budget was not just arbitrary figures but a key policy instrument for allocating public resources among competing socio-economic needs, adding that the stakeholders' engagement on budget preparation was part of the budget reform process to engender inclusiveness and effective participation of people in the Budget processes