WE SAW DEATH FACE TO FACE, JOURNALISTS RECOUNT ORDEAL IN THE HANDS OF TALIBAN

Afghan journalists have described “looking death in the face” and being mocked as “sons of the British” as they were brutally beaten by the Taliban for hours with cables and pipes. 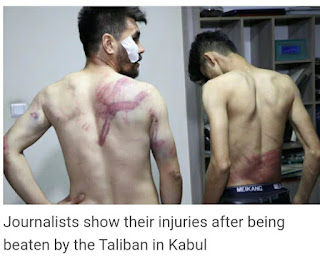 Just weeks ago, the Taliban was dangling promises of a more inclusive and open society, insisting that it had changed since its first brutal regime was toppled 20 years ago.

The violent crackdown on domestic opposition and independent media has raised fears that the Taliban is intent on a total restoration of its 1990s dictatorship, complete with notorious torture techniques.

Severe welts were inflicted on the backs of numerous Afghan journalists on Wednesday after they covered protests in the country’s capital.

“I was looking death in the face. I was thinking about my family, because I thought that I would be killed.”

Mr Karimi had been arrested by the Taliban within minutes of attempting to secure the release of his reporter and cameraman.

Nematullah Naqdi and his colleague Taqi Daryabi were among at least 14 journalists from Afghan and international media including Reuters, Tolo News and Kabul today, who were arrested for trying to report on Wednesday’s protests.

Mr Karimi’s colleagues were released shortly after him. Mr Naqdi and Mr Daryabi “were tortured to near death”, he said. “They lost consciousness at least four times during torture.”

Head of @Etilaatroz confirms the release of all members, but all been “Advised” the same way.pic.twitter.com/Nbng5Adetq

Several of those arrested described how Taliban fighters showered them with slurs while subjecting them to prolonged beatings.

"They called me "Not Muslim", "Son of the British", "Son of the United States," said an 18 year-old journalist who did not want to be named.

“The whipping went on for a very long time so that I forgot to keep track of time. They told me to show my other friends who were filming. I came out of the room crying and everyone was looking at me and they looked hopeless.”

The use of cables as whips was a favoured technique used by Taliban enforcers in the 1990s.

Dozens of journalists have reported being beaten, detained or prevented from covering protests against the Taliban and their perceived Pakistani backers that have broken out in Afghan cities in recent days.

The demonstrations are proving an early test for the Taliban, who after taking power on August 15 promised a more tolerant rule and to work for "the peace and prosperity of the country”.

After initially tolerating the protests, on Tuesday night they declared demonstrations illegal unless permission had been granted by the justice ministry. Fighters began to violently break-up protests the next day.

A protest planned for Thursday morning was cancelled following the announcement.

Earlier this week Taliban fighters broke into the Norwegian embassy, destroying its wine supplies and breaking DVDs of children's films.