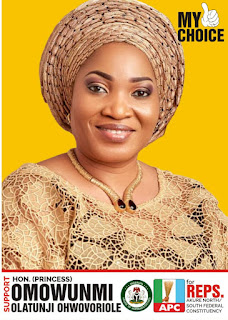 Hon Princess Omowunmi Olatunji - Ohwovoriole... was born in Lagos Island on the 15th August 1973 into the family of Pa Eddo Samuel Olatunji from Akure South Local government Ondo State. Between 1979 and 1985,
She attended St Matthias Primary School, Akure Ondo State. From where she moved to St Louis Girls Grammar School, Akure between 1985 and 1991 for her secondary education.
She is a graduate of Education from National Teachers Institute, Kaduna and she also holds Basic Certificate in Presentation from the National Broadcast Academy as well as Certificate in Data Processing.Graduated from the school of Theology, Bible Faith Training Centre in the year 1993. She was later ordained in 1995 as a Pastor by Bishop Ben Enoch. Princess Olatunji -Ohwovoriole holds first degrees in English Language from Lagos State University and a masters degree in English language from  University of Lagos respectively.
She contested as a councillor and thereafter secured her first political appointment as a board member of Lagos State Sports Council by Asiwaju Bola Ahmed Tinubu, then Governor of Lagos State during his Second term.
To further equip herself, she has been to so many leadership training programs in institutions such as Harvard Kennedy School, USA,Thames valley University, Slough,UK.Nigeria institute for Management, Cambridge  University,Cambridge.
She was elected to represent the people of Oshodi/Isolo constituency II in Lagos State House of Assembly; a position she held for 8 years. She chaired the committee on Science and technology during her first term and later was appointed Chairman Committee on Establishment,and was a member to several committees during her second term in the legislature.Among her positive contributions and activities in Lagos State House of Assembly were bills to her purview which included Resident Registration Bill  powered by the committee on Science and Technology in which she was chairman, Special people's Bill, Lagos State Public Staff Development centre bill and many other bills sponsored by her.
She was also the Commissioner for Women Affairs in Ondo State between 2017-2018.
January 26th, 2021, APC National Caretaker/Convention Planning Committee Appoints Hon Omowunmi Olatunji-Ohwovoriole as a member, Ekiti State APC Registration and Revalidation Committee.
Recently, President Muhammadu Buhari also appointed Hon. Omowunmi Olatunji-Ohwovoriole as Chairman, Governing Council, Federal Polytechnic kaura Namoda, Zamfara State.
Princess Olatunji- Ohwovoriole believes in helping others attain full potentials.Her philanthropist gesture cuts across all tribes; she empowers the aged,widows, artisans and several business owners by giving out soft loans to market men and women.Students also benefited from her scholarship programmes. She has touched the lives of thousands in Ondo State through her Initiatives. Princess Olatunji- Ohwovoriole is a reputable Princess from the respected Osupa royal family in Akure.
As a role model and also as a woman with a big heart, she is today the chairman of the Board of Directors of Monisola Adeniyan Eddo Foundation that has for the past 17 years impacted meaningfully the lives of many aged women, widows and indigents in the society with series of employment and skill acquisition programmes that has helped the less privilege to earn a living. She is a member of the prestigious international organisation,Olave Baden Powell Society,UK. She is the former  Ag.President,National Council Women Society(NCWS ),Ondo State and aBoard Member, National Youth Congress(NYC).
A Member of Forum for Wives of Ondo State official and Political appointee (FOWOSO).
The state treasurer for The Association of Female Politicians Ondo State chapter.
Member of an enviable political platform in Africa: All Progressive Congress (APC).
Princess has written several books. Some of the titles are: Casting Stones, Shapening of the Amazon, the Butler's promise, many more. She is the CEO, Praourk interior Ltd, Yuval Global investment Ltd. She is the  Senior Pastor of the Happy Family Revival Centre. Founder of My Choice Group. She is married and blessed with three beautiful children and a grandson.
Signed:
Joe Ola.
Press Secretary to Omowunmi Olatunji.
October 6, 2021.