WHY I FLED TO LONDON TO AVOID SERVING IN OBASANJO'S GOVT

I fled to London to save my life, avoid serving in Obasanjo's govt - Akande 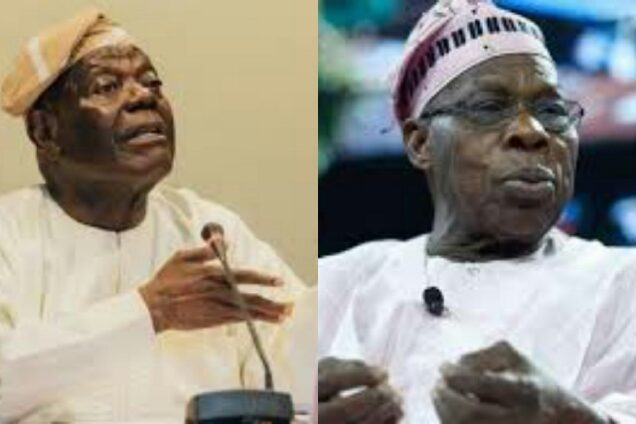 Former Interim National Chairman, All Progressives Congress, APC, Chief Bisi Akande has revealed that he fled to London to avoid serving in the government of former President Olusegun Obasanjo.

He said he feared for his life if he should serve in that government just like Bola Ige was killed, saying that the former president desperately wanted him to serve in his government even after stopping five AD governors from getting second term in 2003.

Akande spoke in his autobiography, “My Participations,” unveiled in Lagos last week.

“I was therefore surprised that after I had been rigged out in 2003, Obasanjo would not relent in his effort to bring me closer to himself. Many of those close to the president were bringing messages to me that Obasanjo would want me to serve in his government.

“My townsman, Tafa Balogun, the IGP, told me, ‘you are going to participate in the in-coming government.’ The Director General of the SSS also called me that the president would want me to serve in the new government. One day Niyi Akintola, SAN, became jubilant for what he said was the inclusion of my name in the in the Obasanjo’s ministerial list. I derisively laughed loudly asking him for his source. He claimed an encounter with Lati Fagbemi, SAN, and with Kanu Agabi, Obasanjo’s Attorney General. I felt uncomfortably amused.

“One day, Chief Afe Babalola (SAN), one of Nigeria’s leading lawyers and Obasanjo’s personal Attorney, told me that the president would like to see me. He said the president wanted me to serve in the Federal Government. He spoke to me on phone.

At that time, my son, Oluwafemi Akande, was practicing law as a pupil in his chambers. Very early on May 28, 2003 when I was in Osun House in Ikeja, Afe Babalola called me again, asking whether I had heard anything from the presidency, I said ‘No’. Is this your personal number? I confirmed, He said before noon, a presidential jet would be at Ibadan airport to take me to Abuja,” Akande explained.

Akande said there was no way he could agree to serve in any government headed by Obasanjo and that he had no intention of putting himself in danger by aligning with Obasanjo for whatever reason.

“I have heard of the story of Ken Saro Wiwa, the novelist who was the leader of the Ogoni people of Rivers State, refused to serve under Sani Abacha and that was why he was eventually killed along with eight of his compatriots. I didn’t want Obasanjo to ask me.

“If he asked me personally and I refused, he might feel deflated and he might not allow me to return home alive, so I quickly called my ADC and asked him if I had any ticket for Lagos-London flight. He said ‘Yes’, I asked him to book and confirm a seat for me immediately. I drove to the airport to quickly board a Virgin Atlantic flight to London without waiting for another from Chief Babalola.

“I got to London in the evening. On May 30, 2003, Segun Osoba phoned to chide that ‘Eiye o so fun Eiye pe oko nbo!’ (That I escaped without confiding in anybody). I didn’t want anyone else to reach me in London, Therefore, I quickly moved to a resort in the Black Sea and I arranged for my wife and daughter to join me,” he added.

He said when he returned to Nigeria, the Igbomina leaders called him to Igbaja, Kwara State to give him an award, adding that Chief Cornelius Adebayo, a former governor of Kwara State met me there