Non-Payment Of Gratuity As Obaseki Increases Minimum Wage To N40,000 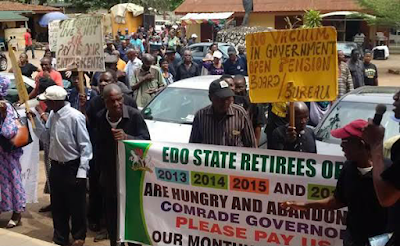 Edo State pensioners who retired in 2012 used the occasion of the 2022 May Day otherwise known as Workers Day to protest against the non-payment of their gratuities, 10 years after they left the service of the state.

The senior citizens, who were at the Samuel Ogbemudia Stadium, the venue of the Workers Day rally, said that the announcement of a N40,000 minimum wage by Governor Godwin Obaseki amounted to nothing if those who served the state for 35 years and retired meritorious were denied their terminal benefits over a decade after they retired.

Governor Obaseki had in his address at the occasion, announced a new minimum wage of N40,000 for Edo State civil servants and called on the Federal Government to declare an emergency to food insecurity.

The protesting pensioners who dorned all-black attires and carried placards appealed to Obaseki to rescue them by paying them their gratuities.

Speaking to journalists at the rally, one of the pensioners, Irene Aiguobarueghian, said since their retirement, they had only been getting their monthly pay but had yet to get their gratuity.