King of Thieves’ generated over N170m in 3 weeks - Femi Adebayo 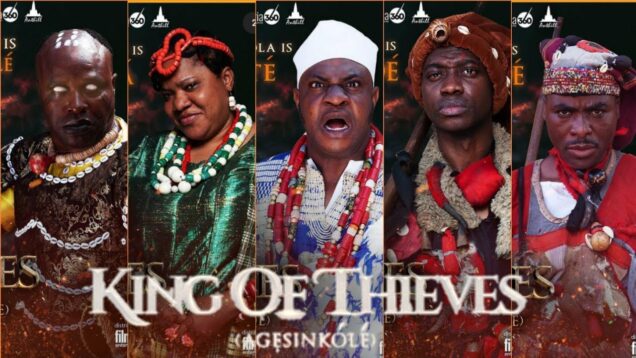 ‘King of Thieves’ by Femi Adebayo

Adebayo disclosed this in an interview with the News Agency of Nigeria (NAN) on Sunday in Ilorin.

He said the movie, which cost him several millions of naira to produce, made over N43 million in three days at its first opening at the cinema despite being the Ramadan period.

The popular movie producer said that the plan was to leave the film at the cinema for two months where it was expected to make not less than N200 million.

He said: “In the history of Nollywood, no movie has ever made N43 million in three days of its opening at the cinema, that is an amount of money some movies will make in three months.

“The movie has actually paved the way for many providers and producers that are producing indigenous contents.”

Adebayo, who disclosed that the movie took him more than a year to produce, said it was a huge success and that he least expected the acceptability of the work.

He said the movie was his first traditional film, adding that it has always been his dream to produce that kind of movie for so many years in the industry.

“The plan was to do a huge movie that will remind people of the beauty of Yoruba culture and I waited till it was time.

“My intention was to showcase the beauty of Yoruba culture to the entire world and at the same time to be able to say one or two things about the society, especially our leaders.

When I was much younger, I had the opportunity to see the beautiful works of Albert Ogunde, he showcased that beauty in Yoruba culture being a Yoruba man,” Adebayo said.

Talking about the challenges faced during the production of the movie, Adebayo said he had to embark on wide research on Ifa as a Muslim.

He further said that finding a location to shoot the film took them a lot of time.

“I saw everything that fascinated me in the location we later got, the village, the river.

saw almost 70 percent of my movie in there even though we had to build more, our caster crew were scared because of insecurity and we had to beef up security.

“If you look at the cast, we had A-List Actors, it was challenging to get their time together, waiting for them to have a uniform timing took almost one and half year to plan the movie,” Adebayo revealed.

Even though Adebayo refused to put a tag on the cost of the production, he reluctantly nod his head to agree that it crossed N100 million mark to produce Agesinkole.

The “King of Thieves” is an epic tale of Agesinkole, an all-powerful bandit, and his reign of terror in the prosperous Kingdom of Ajeromi.

Concerned by his pillaging, the kingdom moves to destroy him, through the hunters, witches and priests, thus beginning this adventurous saga of revenge, bravery, and glory.