God is good. He is blessing us. Everything's gonna be alright': South Carolina preacher gives live sermon outside his BURNING home but still plans to make it to church

A South Carolina preacher gave a live sermon as he filmed his house burning on Sunday, reminding his followers that 'God is good.

Despite watching flames engulf his house, the chipper preacher still said 'I'm doing church this morning. I can't shave, I thought I could shave. Looks like I might not be able to shave much this morning.

'But I just wanted everyone to know that God is good. He is blessing us. Everything gonna be alright. I always say He will make a way and sometimes we don't understand and as I've been saying recently, God might not put the blessing in your hand, but in your reach.' 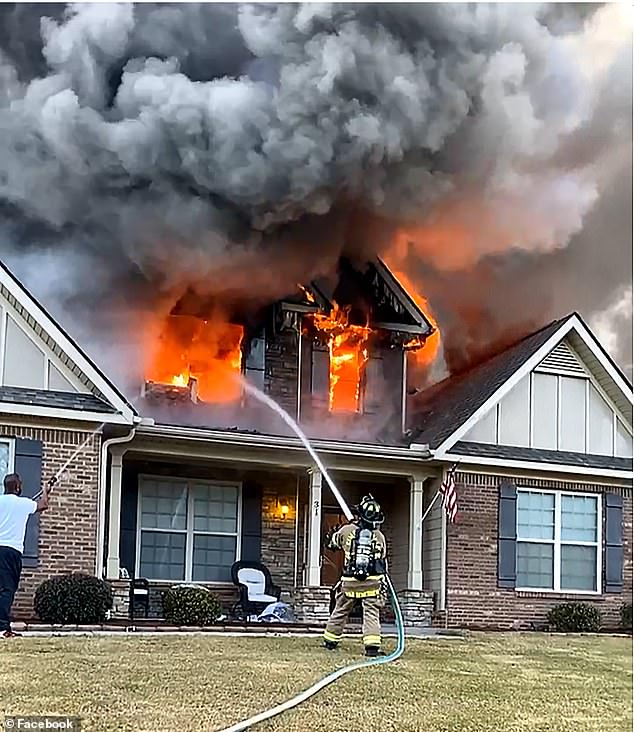 +9
Sammy suspected the fire at his house started due to a heating device or electronics. It started in an upstairs bedroom and appeared to be contained to the top floor. No one was hurt and the whole family made it out of the house

Smith shared the video to his Facebook page showing the large, dark plumes of smoke billowing from the top of his house as flames engulf the top floor.

His two neighbors used their lawn hoses to spray water on the upstairs windows where the fire started until the Simpsonville Fire Department arrived with a much bigger and more powerful hose.

Even after the fire department arrived, his valiant neighbors still helped spray the house down. Other neighbors also joined the preacher in his front yard to offer support.

The 64-year-old preacher admitted in a later Facebook live that he has 'never seen a house burn.'

'The house is probably pretty much destroyed,' he said. 'But God got us out. And, you know, God's will always has to be done. Sometimes we don't understand His will.'

Although the cause of the fire remains unclear, Sammy suspected it was due to a heating unit or electronics, he told WYFF