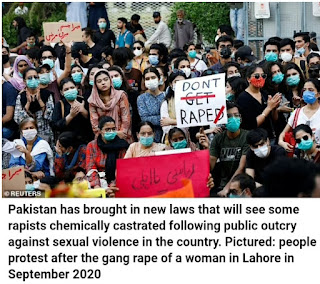 Rapists convicted of repeat offences face chemical castration in Pakistan after a new law was passed following a spate of attacks on women and children across the country.
The new legislation will also allow for quicker convictions through the establishment of special courts which will fast track sexual assault cases

Chemical castration involves using medication to reduce testosterone and has been used for paedophiles in Indonesia since 2016 and child rapists in Poland since 2006.

The move follows a public outcry over the increase in rapes against women and children in Pakistan and the ineffective investigation and prosecution of those sexual violence cases.