They turned up in a mob of several hundred at a migrant centre in South Africa’s Soweto township — unemployed, wielding weapons and angry with foreigners they accuse of taking their jobs. 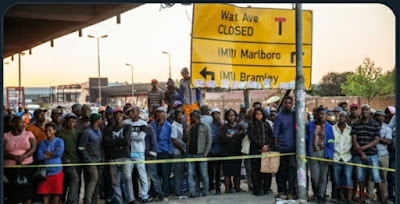 “Foreigners, go home,” they cried, according to witnesses.

With unemployment at 35 percent — and rising up to 65 percent among youth — competition for jobs has spawned resentment among some jobless South Africans.

In the past, xenophobic protests have morphed into violence. Attacks against foreigners left at least 62 people dead in 2008, while another seven were killed in similar unrest in 2015.

Armed mobs descended on foreign-owned businesses around the financial hub Johannesburg in 2019. The ensuing clashes left at least 12 people dead, of whom 10 were South African, according to the government.

In recent weeks, scores of protesters have been staging demonstrations against undocumented migrants in what they have dubbed Operation Dudula, Zulu for “drive back”.

‘Stealing jobs’At the Methodist migrant community centre in Soweto, where about 100 migrant families live, there had been rumours of an attack.

A horde arrived earlier this month — some wielding traditional Zulu leather whips — at the centre in South Africa’s most famous township, located south of Johannesburg.

“Foreign nationals are stealing jobs that belong to South Africans,” protesters said, according to witnesses.

Sithulisiwe Chinora, a 22-year-old Zimbabwean, recounted how she started shaking violently, her infant wrapped on her back.

“I thought I was going to die that day,” she said.

Father Paul Verryn, who founded the centre, says it is clear who the protesters were.

“They are xenophobic activists, they clearly targeted foreign nationals because they want them out,” said the minister, who is famous for having opened a church in Johannesburg to thousands of undocumented Zimbabweans after the first anti-immigration attacks.

But the Operation Dudula movement says it is pacifist.

Its leader Nhlanhla Lux Dlamini, a man in his thirties from Soweto who often dresses in a military uniform and bullet-proof vest, says he is simply seeking to “restore law and order”.

“The law enforcement is failing us,” he has told reporters.

Foreign worker quota?Last weekend, Dlamini led a protest outside a supermarket demanding the sacking of foreign workers employed there.

“There is (nothing) xenophobic about that, it’s the law,” he told journalists. “Any job that doesn’t require skill in South Africa belongs to South Africans.”

Around 3.9 million foreigners live in South Africa, a country of almost 60 million, including political refugees, according to official statistics.

Human Rights Watch says foreigners are often made scapegoats in a country with one of the world’s most unequal societies.

Jay Naidoo, a founding member of the Cosatu workers’ union, said anti-immigrant arguments did not hold up.

“Even if they were to expel all the immigrants, our level of crime would not drop, neither our level of joblessness,” he said.

So far, the latest demonstrations have not spiralled into violence.

A police source, speaking on condition of anonymity, said law enforcement was keeping an eye on the demonstrations.

But “the right to protest is enshrined in the country’s constitution and so far, they haven’t committed any action that required the police to enforce the law,” the source said.

President Cyril Ramaphosa said on Wednesday the authorities were closely watching “pockets of groupings that are trying to foment a type of negative attitudes” towards foreigners.

At the start of the month, the government said it was working on a law to install a quota for foreign workers in South African companies