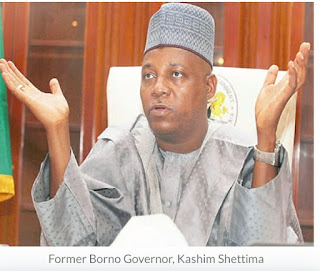 According to Onanuga, Tinubu personally disclosed his choice to journalists at the Daura residence of President Muhammadu Buhari.

“Senator Shettima is former Governor of Borno State and a close associate of Tinubu who has been a staunch supporter and campaigner for the choice of Tinubu as the next President of Nigeria.

“He toured many states with Tinubu since December 2021 where he addressed party delegates and mobilised support for the former Governor of Lagos State. “

Before the announcement of Shettima as the new running mate for Tinubu, former national officer of the APC and now erstwhile party vice presidential candidate, Aminu Masari, stepped down as running mate to Tinubu.

Masari in a statement dated July 10, titled,” Resignation as APC Vice Presidential Nominee,” said he took the decision to enable “Asiwaju have more latitude to give more accommodation and inclusion that will position our party to win the coming elections, with the support of the people of Nigeria.

Masari further disclosed that he has submitted a “withdrawal letter and affidavit to that effect as the Vice Presidential Candidate to Asiwaju Bola Ahmed TInubu in the coming elections. “

His letter reads in part:” “this is to inform our esteemed party leaders under our able President Muhammadu Buhari, teeming party members and the great people of Nigeria, of the outcome of a crucial discussion I just had with the flag-bearer of our great party, All Progressives Congress (APC), Asiwaju Bola Ahmed Tinubu.

“Recall that I had the singular honour and privilege of being nominated as the running-mate to Asiwaju Tinubu last month after a keenly contested presidential primary ahead of the 2023 general elections.

“But, after much reflection and wider consultations, I now wish to step down. I realized that my decision will enable Asiwaju have more latitude to give more accommodation and inclusion that will position our party to win the coming elections, with the support of the people of Nigeria.