WIFE SETS HUSBAND ABLAZE OVER CHILD OUTSIDE WEDLOCK IN OSUN

Wife Sets Husband Ablaze For Having Child Outside Wedlock In Osun 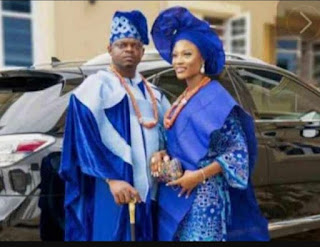 A middle-aged man identified as Bolu Bamidele was on Tuesday murdered by his wife, Akanji Ifeoluwa Hadassah Bamidele in Osogbo, Osun State capital for having a child outside their wedlock.

Investigations revealed that the deceased who was a Cairo-based businessman returned from his base unannounced to Nigeria as a surprise joker to his wife not knowing that, his visit would eventually send him to his early grave.

Though the motive of the deceased was to visit the country and celebrate the birthday anniversary of his wife in a big way but instead of heroic reception from the wife, he was said to have been slapped with an accusation that he was unfaithful to their marriage to the extent of having a child outside the union.

The development, however, was said to have generated heated arguments between the couple who threw decorum into the wind and engaged each other in a war of words.

It was gathered that the wife forcibly took his husband’s phone to scan through to ascertain information received concerning the infidelity of his husband but in the process, the husband was said to have resisted her and this infuriated the agitated wife, who went berserk, after claiming that, she had justified that her husband has really cheated on her for refusing to release his phone to her for fact-finding.

She further set her ablaze after locking him in the house and all efforts of residents in the area to save his life proved abortive as it took them hours before they could gain access to the house as a result of burglary proof erected at the entrance door and windows of the house.

The wife thereafter was said to have fled the scene to an unknown place and the state police command is now on her trail.

Before his death, an eyewitness account revealed that the deceased was rushed to a nearby hospital before giving up the ghost, the following day.

When contacted for comment, the state police command Public Relations Officer, Mrs Yemisi Opalola confirmed the story and remarked that the deceased was first rushed to Osogbo central hospital before later being referred to University College Hospital (UCH), Ibadan where he finally died