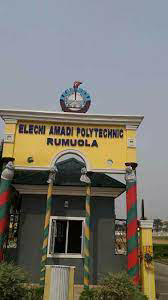 A lecturer at the Captain Elechi Amadi Polytechnic, Rumuola in Port Harcourt, Zoe Tamunotonye, has turned into a bus conductor for survival over the alleged refusal of the school management to pay him his six months salaries.

A statement signed by its Registrar, Chris Woke, dissociated itself from an incident of alleged sexual misconduct against Tamunotonye involving a 200-level female student and consequently slammed him a three months suspension, pending the outcome of an investigation.

But Tamunotonye was spotted in a viral video loading passengers and calling out areas of destinations.

Adorned in black trousers and a white T-shirt with sandal shoes, the lecturer was seen announcing the bus’ destinations

“Mile one, Mile three, Ikoko. Please hold your change, loading bus,” the lecturer was heard saying while also assisting passengers with their luggage.

When contacted on Monday via telephone, the distraught lecturer told our correspondent that he resorted to the conductor business as several attempts to get an alternative job had hit a brick wall.

Tamunotonye said, “I had an issue with my school and they suspended me for three months without salary. Eventually, they set up a committee, did their findings and after the end of the committee’s work, since March, the committee’s report has not been released.

Rather, management wrote me a letter to resume work, that they have lifted my suspension. But that I should write an apology letter to management.

“However, I resumed work and started teaching; but they refused to pay my salaries since January. This is six months I have not been paid.

“So, you know the situation of the country. I have been the one assisting my family. All my siblings are not working, but now I have to depend on them. And I saw that the burden was becoming too much on them.

“It has been six months now I have not given my mother anything for feeding. There are six young widows I take care of, some of them in my committee and also some aged people that I support with my little pay.

“One of the widows called me last Friday that the children need to pay the examination fee of N3000. I couldn’t raise it.

“I can’t even raise money to take care of myself on a daily basis, and I can no longer depend on my family. So I looked around, but there were no alternative jobs.

Even in this bus conductor business, I had met about six drivers who turned me down because of my status. I beg for transport to go out. It is my neighbour, an Igbo woman that has been feeding me since January. This is worse than staying in the prison

“Until I met this man and explained to him that I am dying in silence before he availed me the opportunity to serve him as conductor.”

Asked what the actual problem with the school was, he said it was about a young lady in the polytechnic whom he had a transaction with outside the institution, saying he was later accused of sexual harassment.

“I even reported the matter to the school. The security said it had nothing to do with the school, we should go and resolve our problems. The matter got to the commissioner of Police and he resolved the matter amicably. All parties went home.

“It was one week after when I wanted to launch my book in honour of the governor. That was when my school went to the media with this claim.

“So, I am asking my school to release the report of the committee. If I am indicted, there is punishment according to my school laws for such an offense, which is not to write a letter of apology. It is dismissal.

“They should dismiss me if I am guilty of the harassment they accused me of. But if I am not, they should go and clear my name in the media and pay me my salary. I have nobody to defend me. My mother is a trader,” he stated while fighting back tears.

Continuing, the lecturer said, “If I had any bad name he (Rector) would not have engaged me. He has been giving me confidential jobs to do. I was his research assistant until he got his Doctorate Degree.

“Society should help me. If I am indicted they should send me to prison. If I am not, they should not make me feel guilty. Six months without pay is worse than prison,” he lamented.

When contacted, the Public Relations Officer of the Polytechnic, Benson Wekere, confirmed that he saw Tamunotonye’s video circulating online working as a bus conductor.

Wekere, however, said he had informed the school management of the development, saying he awaits authorization before he could speak on the issues raised by the lecturer.

“I can only speak for the polytechnic when I am authorized to do so. What I am asked to say is what I will say.

“So, I have passed the information to my boss. As soon as I get a response in that regard, I will let you know. I am always available to speak with the media because they are my colleagues,” Wekere said.