PRINCE ADEMOLA ADEGOROYE: THE REJECTED STONE HAS BECOME THE HEAD OF THE CORNER.

PRINCE ADEMOLA ADEGOROYE: THE REJECTED STONE HAS BECOME THE HEAD OF THE CORNER. 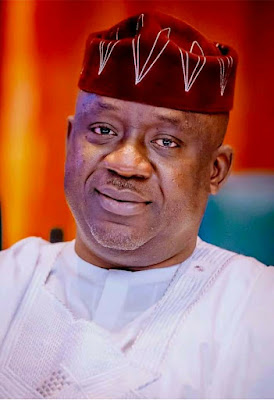 Life, as seen and experienced by man, explains and unfurls itself in various ways and manners. We all see, hear and experience these. Man enjoys claiming to have a full grasp of how and why happenstances take place. We also love talking on behalf of God. These are based on our perceived personal beliefs, which we propagate as absolute truth. One of the fallacies and misleading sayings we have been deluded with over the years, is the saying "opportunity comes but once." Wherever they got this notion from, it is capricious and not in agreement with God's way and natural laws of life. Man rises and falls; he falls and rises. That is life; its bot static as change takes place everytime and everyday. Life is not one straight, stretch  road. The journey of a man is like a typical Nigerian road. There will be an area that is smooth with asphalt overlay. There are areas where you have bumps, potholes, failed portions, detours and junctions etc. It will contain slopes. There is no condition that is permanent. To gloss over the stormy and gloomy period of a man shows immaturity and lack of knowledge of history. In politics, never say never. You cannot tell what is going to happen next. Be it promotion or demotion, any can become the lot of a politician anytime. We have seen someone undergoing rehearsal for his swearing-in as governor billed for the following day only to be removed and demoted to nobody within a twinkle of an eye. Many Governors, Senators and others have been proclaimed elected by the electoral umpire but get sacked by the courts. Politics is a like a wheel of fortune that spins with the speed of light.

Over the last few weeks, the Social Media, particularly Facebook, has been awash with news of the nomination, confirmation and the swearing-in of Prince Ademola Adegoroye as a Minister of the Federal Republic of Nigeria. Commentaries, opinions and praises have been coming his way. Congratulatory messages here and there. I am sure his cell phone would have been bombarded with unprecedented volume of phone calls and messages. Some people even went as far as digging up his family panegyrics and splash them on Facebook. The hitherto forgotten ambitious big boy of Akure politics has resurfaced, in a big way for that matter. And just like that, Prince Ademola Adegoroye, who, as recent as this time last month, was not counted among the high profile politicians of the State capital and the state a whole, is now the number one political office holder in Akure, in Ondo Central Senatorial District and in the state. What a turn around, a complete change in status!

I have no doubt that some, many would be wondering, who Prince Adegoroye is. To such, he is an upstart. But let them know that the Akure-born, businessman, trained legal practitioner is not a rookie, neither is he new in the murky waters of politics. To call him a veteran in politics of this  Republic will not be out of place.

He was the first elected member of the State House of Assembly, representing Akure Constituency 1 in 1999. He won the election on the platform of the defunct Alliance for Democracy, AD for short. He took steps to better the lot of the people in those days. It is on record that his ingenuity to improve the city of Akure resulted in him being at loggerheads with the government of late Chief Adebayo Adefarati. Ademola Adegoroye assembled the crop of young, energetic, unemployed youths of the city. He engaged them for the clearing of drainages in the capital to enable free flow of water. The government of the day did not find it funny as it manacled and scuttled the worthy initiative, saying he was using it to obtain cheap popularity. They also said he was doing it to discredit the govt and thereby boost his gubernatorial ambition.

By the time the 2003 election was approaching, AD was becoming moribund as a result of internal bickering, political insensitivity and immaturity, having fallen for President Obasanjo's masterstroke. All the South West governors of AD adopted candidate of the PDP President Obasanjo and campaigned vigorously for him, thereby relegating themselves and their party to the background. They all lost their re-election bids.  It will be recalled that Tinubu, who refused to endorse Chief Obasanjo as his party's Presidential candidate in Lagos was the only AD Governor that survived the PDP onslaught in 2003. BAT said he was elected on the platform of AD and not afenifere, which adopted OBJ. The Obasanjo regime and PDP spent the years 2003-2007 to finish off AD. Prince Adegoroye was perhaps the first Ondo State popular politician to pitch his tent with Bola Ahmed Tinubu in the Action Congress a.k.a AC. It was therefore not surprising that at the 2007 general elections, Prince Adegoroye was the gubernatorial candidate of the AC in Ondo State. If there is a forte Prince Adegoroye has and worthy of emulation, it is consistency in pursuance of his goals. The dark in complexion politician and about four other gubernatorial candidates of other parties, jettisoned their legal battle at the election tribunal against the then Governor Olusegun Agagu. He was appointed to the board of Oodua Group thereafter. After the Nabaruma and Appeal Court judgements yanked Agagu out of office, Prince Adegoroye returned to his party, the AC. He has refused to hop like a frog as most politicians are wont to. AC has since metamorphosed into ACN before collaborating with CPC to become APC.

Since 2009, it has been a long, tortuos  road for him, politically and otherwise. He tried his hands on the Akure kingship, he was denied by the rulers of that time. He contested elections many times and came out on the losing side. As a result of these falling shorts, he became the butt of the people, who labelled him with many undignifying nicknames symbolising his inability to triumph at his pursuits. People write others off easily. Life can be interesting at times. Truly, "there is no real fall as long as one still tries for seeming setbacks make the strong man wise."

Before this resuscitation, one of his followers told me in secret that Prince Adegoroye was making his way back to politics in a big way. The supporter was of the opinion that Akure should rally round and support him to be the people's representative in the National Assembly. He came out truly and contested for the House of Representatives candidacy of APC and lost, leading from the rear. The guy said the Prince should be backed as he is reliable.

Whatever forces assisted him to get this ministerial slot has agreed with that supporter that Prince Ademola Adegoroye is worthy of elevation. Whatsoever you believe about people getting out of the valley only to land at the mountain top, Prince Adegoroye's case is a reality. The God in heaven is not through with you, i and everyone until we breathe our last. Let mockers have their say. Let them even have their way, it is for a season, a phase, yet the God of many chances is not through with the living. He has a way, His way of making the neglected and forgotten become reckoned with.  After all these experiences, definitely, there is light at the end of the tunnel. After darkness, comes light. Sunshine comes after gloom.

To Prince Ademola Adegoroye, congratulations. You are not a faint hearted or lily-livered but a strong man. Conscious of it or not, you borrowed a leaf from Abraham Lincoln historical life that setbacks are only for a period and are neither permanent nor a definition of an individual. You have paid your dues. Your time has come. Uwo likan, as we say it in Akure. You had a vision in those days, which was prevented from coming into fruition by those, who feared positive change. You can still revive it. Akure, your beloved city still yearns for someone, a redeemer to lift it. Prince Adegoroye, the Honourable Minister, do not forget the prophesy that was revealed to you at Oke Erinmo Prayer Mountain, Osun State when you were a member of the House of Assembly. The prophet said, "igi araba ni e ti opolopo a maa sa si abee." (You are an oak  under, whom many will be given shelter.)

Anomokore, anomoberen, damati bumio, alemati leo which i quoted at the beginning of this write-up is taken from one of the songs of Alhaji Kollington Ayinla in the 80s. The meaning is that do not write me off, nightfall has not come.