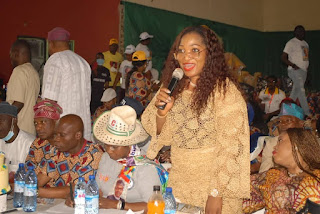 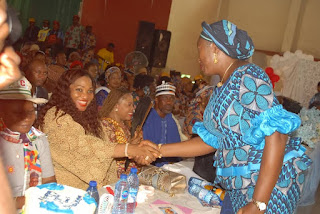 The grand ceremony which also marked the 18th edition of Monisola Adeniyan Eddo Foundation empowerment for widows was witnessed by the Governor of Ondo State and his wife, Excellency,  Arakunrin Oluwarotimi Akeredolu and Chief Mrs. Betty Anyanwu-Akeredolu ably represented by the Secretary to Ondo State Governor, Princess Oladunni Odu and the State Commissioner for Women Affairs, Dr. Adebunmi Osadahun respectively.

Giving her remarks, Hon. Omowunmi said her ambition is fuelled by her passion to attract progress to her constituency, stressing that she is ready to use her networks to lobby at the National Assembly and work with all appropriate government agencies in order to make life more meaningful for the people. 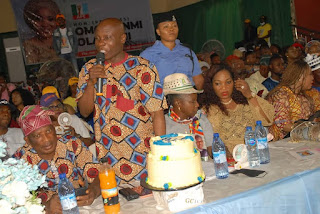 While calling for supports towards achieving her goal, Hon. Omowunmi  said she will among others bridge the gap between the electorate and their representatives, enhance feedback mechanism and also ensure that the voice of her people is heard.

She however used the opportunity to thank all leaders of All Progressives  Congress in the state and also the wife of the Governor, Arabinrin Betty Anyanwu Akeredolu for advocating more female participation in governance just as she acknowledged her numerous initiatives that has been lifting many women out of poverty in the State. 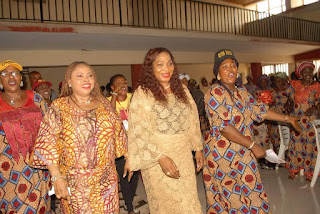 On why she has in last 18 years been empowering people of her constituency through the Monisola Adeniyan Eddie Foundation, The Akure Princess said it is an annual event that commemorates the passing of her late mother for her selfless lifestyle and.generosity.

"The aims of the foundation includes provision of charitable items for the needy, provision of free vocation training for the aged, widows, and orphans", she added saying no fewer than 125 graduates from the vocational training will also receive certificates of completion.

Flagging off Hon (Princess)Omowunmi Olatunji for Senate, the Governor of Ondo State, Arakunrin Akeredolu said his administration is

committed to empowering and encouraging women to attain the peak just as he noted that with the new arrangement.that favours inclusion of 2 female.delegates, there is high hopes that women will achieve their overall objectives.

The.Governor also used the opportunity to acknowledge the good work done by Omowunmi by yearly reaching out to the less privileged saying it is a sure sign of responsibility.

Also speaking, the First Lady Chief.Mrs.Betty Anyanwu Akeredolu while stressing the need for women to rally round and support women vying for political positions said this is not about Omowunmi's interest but about women inclusion in governance.

Mrs. Akeredolu who said for too long women have been relegated to the background, further noted that it is time to change the narratives and encourage Omowunmi for daring to contest the position.

The climax of the event however was the official flag off of Omowunni For Senate by the Governor of Ondo State.

Other highlights of the event include distribution of palliative to over 1,000 widows as well as the cutting of the cake.