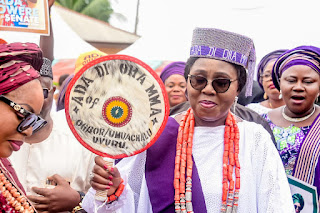 The Founder of Mychoice Group and former Commissioner of Women Affairs, Hon. Princess Omowunmi Olatunji has congratulated the First Lady of Ondo State, Arabirin Betty Anyanwu Akeredolu on her Chieftaincy cap as she was conferred with a traditional title of Ada di oha Mma by Eze Chinyere 1 of na Umachalu Autonomous Community in Aboh-Mbaise Local Government Area Imo State. 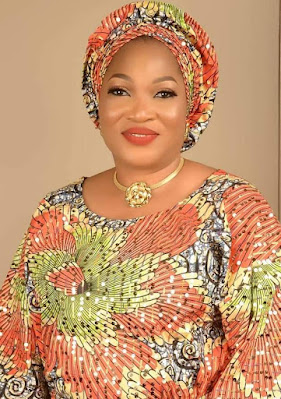 Adorning Ondo First Lady with instruments of Staff, the Eze Chinyere 1, HRH Engr. G.C. Adiukwu, said the traditional title of Ada di oha Mma (Daughter Valua by All), was in recognition of her love for her maiden environment and the love she demonstrated toward fellow human beings who had crossed her path in their lifetime.

In a congratulatory message made available to the press, Hon. Omowunmi acknowledged several life transforming initiatives of the First Lady saying it takes only a woman with a heart of gold to embark on projects that has direct impact on all the citizenry irrespective of party affiliation.

According to her, Ondo First Lady considers humanity first and her selfless service has remained one of her hallmark as a great leader.

"This award is another attestation to the leadership quality of  Chief.Mrs.Betty Anyanwu Akeredolu" she added.

In another development, Hon. Omowunmi has expressed warm greetings to Christians most especially members of Mychoice Group on the occasion of this year's celebration of Palm Sunday.

In a statement she personally signed and made public, the Akure Princess enjoined Christians to remind the triumphant entry of Jesus Christ into Jerusalem knowing that despite the challenges they face, there are better days ahead.

Hon. Omowunmi while also noting that it is also a time to be reminded to bear ones cross without complaining and begrudging one another, said as a nation, the people have gone through a lot but there is hope as the end of the tunnel.