FIVE TECH COMPANIES RICHER THAN OVER 100 COUNTRIES OF THE WORLD 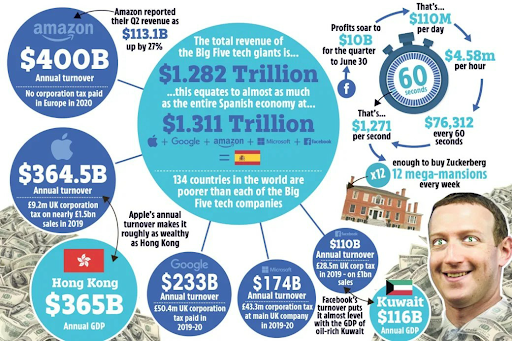 FOR proof not all business suffered in the pandemic, tech a look at this.

Our graphic reveals how the world’s five biggest tech giants are now richer than most of the countries on Earth.

They now earn so much that together the big five generate almost the same revenue as Spain — the world’s 14th richest economy.

Even on their own, each of these firms that dominate our lives generates more money than 134 countries around the globe.

Which means that in the whole of 2021 the company that Jeff Bezos founded 27 years ago is expected to earn a mind-blowing £286billion.

Incredibly, that is more than the world’s 33rd richest country, the ­Philippines, will generate this year.

Apple is as rich as the economy of Hong Kong — the financial powerhouse of the Far East. Google earned £44.4billion in three months — that’s £3.4billion a week — putting the search engine and YouTube owner on target for £177billion for the year.

That’s more than the ten million people of Portugal will create in a country that is ranked the 49th ­biggest economy on earth.

Microsoft’s revenue for 2021 is expected to be £125billion — bigger than Hungary’s economy.

Facebook boss Mark Zuckerberg is worth the same, and this week his company announced profits of £3.3million an hour, making £21billion in just three months — up 56 per cent on this time last year and putting it on track to earn £79billion in 2021.

That means Facebook is richer than Slovakia — 61st in the world — and almost earns as much as oil giant Kuwait, the 60th richest economy.

Revenues and profits for the big five tech companies are now so huge that they dwarf traditional big earners such as banking, entertainment and even healthcare.

Robert Watts says: “There are ­growing fears about the creeping power of these silicon giants, and it’s not just long-held concerns about their ­handling of our personal data and whether they pay enough tax.

“Capitalism relies on competition, and some politicians believe these mammoth corporations are squashing small businesses. Last year a committee in Washington DC said tech giants have become the kind of monopolies we last saw in the era of US oil barons and railroad tycoons.