200,000 DISPLACED PERSONS YET TO BE REPATRIATED IN NORTH EAST- ZULUM

North-East: 200,000 Displaced Persons Yet To Be Repatriated ― Zulum 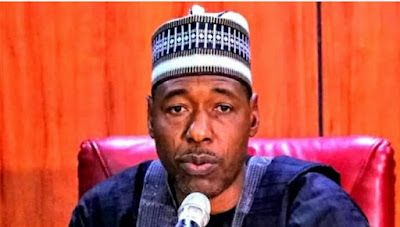 Over 200,000 persons displaced by the Boko Haram insurgency are yet to be repatriated in the North-East.

This is according to Governor Babagana Zulum of Borno State, who is now looking for President Muhammadu Buhari’s approval for funds to re-establish crisis-affected communities in the state.

The people fled their communities to become refugees in neighbouring countries following constant attacks on them by the insurgents.

Zulum, who is the vice-chairman of the Presidential Committee on Repatriation, Returns and Resettlement of Displaced Persons in the Northeast, made the declaration while presenting the report of the Technical Working Group (TWG) to Vice President Yemi Osinbajo during the weekend at the Presidential Villa, Abuja.

The governor said that within the last few years, about 50,000 people have been repatriated.

He called on the Vice President who is Chairman of the Presidential Committee on Repatriation, Returns and Resettlement of Displaced Persons in the Northeast, to ensure that President Buhari gives immediate approval in terms of funding and other logistics required for the re-establishment of the destroyed communities in Borno State.

Osinbajo, on his part, has assured that Nigerians displaced in the North-East who are still in Cameroon would be coming home soon as the Presidential Committee has ordered the immediate resumption of their repatriation.