WHAT YOUR MOUTH SAYS ABOUT YOUR HEALTH

From ulcers to bleeding gums, experts reveal what your mouth says about your health 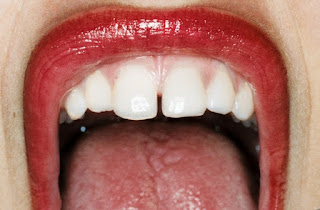 Our mouths are the one thing we use constantly – talking, drinking,sipping, shouting and of course, scoffing all things delicious.

But beyond knowing you’ve got to brush your teeth twice a day and floss, how much do you really know about your mouth – and what it says about the rest of your body?

Find out what your mouth says about you.

Probably not much, which might have something to do with the fact that most of us are due a check-up.

“Your mouth really is the gatekeeper to your entire body, and your dental team are the only ones trained to spot early signs of problems,” he explains.

ORAL ENTRY Gum disease ‘increases chance of catching Covid’ - are you at risk?

“We’re in a privileged position of seeing our patients regularly, often when they are healthy, unlike our medical colleagues. As a dentist,

I don’t just spot the signs of tooth decay and gum disease, I’m looking for abnormalities and early signs of disease in your neck muscles and glands.”

So it’s not just our teeth and oral health taking a hit if we skip our twice-yearly dental checks.

We could be missing vital signs about our wider health, from diabetes to cancer and eating disorders.

A drop of Bonjela normally dispatches ulcers pretty quickly, but if the sore, red lumps long outstay their welcome, they could signal something more serious.

“Ulcers that take longer than 10 days to heal could be due to a reduced immune system, iron or vitamin B12 deficiency, oral HPV (human papillomavirus) or mouth cancer,” says James.

They’re very common. But if you have a mouth ulcer that isn’t healing, it’s time to seek some help,” she explains.

And it’s not just angry ulcers that could signal oral cancer.

According to the NHS, so can unexplained, persistent lumps in the mouth or neck that won’t go away.

A few drops of blood after some overzealous flossing might seem little cause for concern, but don’t ignore it.

“Bleeding gums is a sign of inflammation in the body and a reduced immune system,” says James.

Puffy gums can also signal pregnancy. “Often we spot when our patients are pregnant just by looking in their mouths,” reveals James, noting that symptoms include swollen gums and more bleeding than usual.

“It’s much easier to spot if we’ve seen the patient previously, when they weren’t pregnant, so we can compare.”

Dentists can even clock that a woman is pregnant before she opens her mouth, says James.

“Some will feel nauseous when the chair is laid flat!”

“Dry mouth or a white coating on your tongue could indicate diabetes,” says James.

The latter is a sign of dehydration, which is common in people with diabetes, and also a symptom of hyperglycaemia (high glucose levels).

“A dry mouth can also point to thrush or a vitamin B deficiency,” adds James.

Erosion of the tooth enamel is a major giveaway that someone is struggling with an eating disorder.

“A distinct pattern of tooth wear can be due to repeated episodes of vomiting. This can indicate eating disorders, such as bulimia, and is also associated with increased cavities,” says Susie.

The Benefits of A.I. Adoption in Healthcare

“This is because vomit contains stomach acids, which are corrosive, and strong enough to wear away the enamel that protects your teeth,” she explains.

“Erosion increases the risk of decay, causing sensitivity, and can even lead to changes in your bite or tooth loss.

In sensitive cases like these, our duty as dentists is to understand the cause of any erosion and treat it accordingly.

If we feel someone may be displaying signs of an eating disorder, we want to signpost them to get help and ask if they ‘d like us to refer them to their GP.”

When an eating disorder isn’t involved, food might be the culprit. “Tooth decay gives us a clue that your diet is a problem,” says James.

“Worn, thin or sensitive teeth can point to a high-acid diet or acid reflux.”

Disease of the gums can lead to tooth loss and foul-smelling breath, but it also indicates a range of other potential issues.

Your dentist will advise you if they have a concern and think you should follow up and see your GP.

Plaque build-up can indicate more than just the fact that you need to be more thorough when brushing.

“If your mouth contains a lot of bacterial plaque, theories suggest that you could be breathing this in and spreading the bacteria to your lungs,” says Susie.

“While dentists can’t diagnose whether a patient has a lung problem, if they’ve got poor oral health, there is evidence that aspirated bacterial plaque could cause infection or aggravate existing lung conditions, particularly in the elderly.”

Susie says it’s vital to improve your oral health to help avoid such a scenario.

Her advice is: “Brush twice a day with fluoride toothpaste, paying particular attention to where plaque gathers around the gumline, and floss or use interdental brushes once a day to get into the hard-to-reach areas to clean between your teeth.”