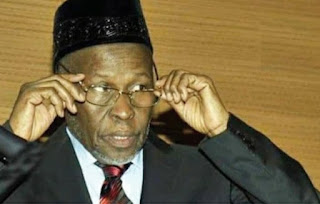 A few hours after resigning from office, Senior Advocates of Nigeria, lawyers, civil right groups and some branches of the Nigerian Bar Association on Monday called for the probe of the erstwhile Chief Justice of Nigeria, Ibrahim Muhammad.

They unanimously said that the allegations against the former CJN should not be swept under the carpet.

Muhammad’s resignation was made public on Monday morning. According to reports,  he tendered his resignation on the grounds of ill-health, barely a week after 14 Supreme Court Justices, in a joint petition, levelled grave allegations of maladministration and financial impropriety against the Bauchi State-born jurist.

The news of his resignation caught the nation unawares on Monday morning as his media aide, Ahuraka Isah, who initially denied it,  subsequently confirmed the development.

The President Muhammadu Buhari,  swore in the next most senior justice, Justice Olukayode Ariwoola, as the acting CJN at the Council Chambers of the State House, Abuja.

The President, who noted that he received the resignation letter of the outgoing CJN with mixed feelings, conferred upon Muhammed the national honour of Grand Commander of the Order of the Niger.

In an unprecedented development in Nigeria’s judicial history, the Supreme Court justices had in a leaked letter, accused Muhammad of abandoning his responsibilities and diverting funds meant for the running of the Supreme Court.

They complained about their accommodation, vehicles, electricity tariff, supply of diesel, internet services to justices’ residences, training for justices and epileptic electricity supply to the court.

They accused the CJN of receiving their demands without acting “after several persistent requests” to hold a meeting which was finally held on March 31, where a welfare committee was set up.Among other things, the Supreme Court Justices demanded to know what had become of funds set aside for the training of justices, alleging that they were denied the usual two to three international workshops annually.

But in his response, the jurist, who was elevated to CJN on January 25, 2019, after his predecessor, Justice Walter Onnoghen,  resigned over false asset declaration charges at the Code of Conduct Tribunal, blamed “a devastating economic crunch,” for his inability to meet their needs.

Muhammad’s reaction to the allegations was contained in a statement signed by his Special Assistant on Media and Strategy, titled, ‘State of Affairs in the Supreme Court and demand by Justices of the Supreme Court.’

While berating his colleagues for bringing their complaints to the public, Muhammad claimed that the apex court under him had been discharging its responsibility despite the cash crunch facing the establishment.

Muhammad was sworn in being the most senior Supreme Court justice following an ex-parte order of the CCT on January 23, 2019, which suspended Onnoghen from office.On July 17, he was confirmed by the Senate as the substantive CJN and subsequently sworn in by Buhari.

The Chairman of the Nigeria Bar Association, Makurdi branch, Maimuna Ikwulono, in an interview, submitted that the allegations against the retired Justice should be investigated “so as to help administration of justice.”Ikwulono, the first female NBA chairman of the Makurdi branch, said that the impropriety and administrative inefficiency levelled against the jurist should not be swept under the carpet.

“Nobody can say that those issues raised be swept under the carpet because we are looking for a solution. Certain things are being done that are hampering the justice administration process, that is affecting judicial responsibilities.

“It is incumbent on the relevant authorities to look into it to stop the wrong to have smoother administration of justice. It is not out of place to look into it,” she said.

Also, the Chairman of the Ilaro branch of the NBA  in  Ogun State, Talabi Oluwantonwo, told one of our correspondents that the former CJN should be investigated.

Oluwatonwo expressed shock at the speedy manner the executive accepted the resignation letter of the CJN without probing him on the allegation.

He said, “We were told that he resigned this morning. However, there are allegations against him bothering on corruption, he should be probed first.

“They should probe him first before accepting his letter of resignation instead of giving him a national award.”

Also, a former Secretary of the NBA, Asaba branch, AF Bridebra, endorsed the demand for an investigation of the Supreme Court under Muhammad.

Bridebra, who spoke in Asaba, stated, “If there is any place we need transparency, it is the judiciary. The man (Muhammad) should be probed.

“The man was rumoured to have been involved in corrupt activities, so he should be probed. Not only him but it should be extended to all Supreme Court judges and NBA.

“The judiciary, as far as I’m concerned, is dying. Every state judge needs to be investigated; this is the beginning of the End-SARS revolution in the judiciary.”

The Chairman of the NBA Section on Public Interest and Development Law, Dr Monday Ubani, in an interview said, “Resignation does not stop investigation if they so desire. One is that there must be the desire to look at the allegations raised by his colleagues, especially on issues of mismanagement of resources.